END_OF_DOCUMENT_TOKEN_TO_BE_REPLACED

GOLD PRICES rose against a falling US Dollar on Wednesday morning, touching 2-week highs at $1266 per ounce despite an overnight jump in longer-term US interest rates after lawmakers in Washington voted to approve President Trump's tax plan.
Adjusted for market-based inflation forecasts, 10-year US interest rates typically move opposite to the direction of gold priced in Dollars.
On a weekly basis however, this negative correlation between gold and real 10-year Treasury yields has been weakest over 2017 since the 12 months ending July 2015, reading -0.43 against an average over the last decade of -0.74. 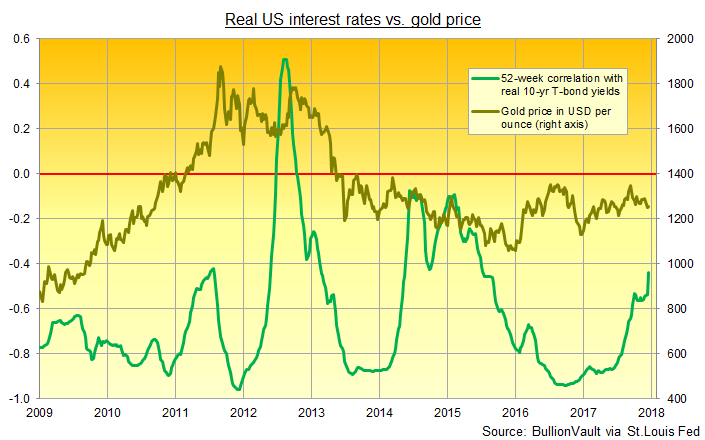 Due for a re-vote today owing to a procedural snag, Trump's tax cuts will add $1.4 trillion to the annual federal deficit over the next decade according to the bi-partisan Congressional Budget Office.
China will meantime push further "structural" reforms, Beijing announced today, seeking what the official news agency called "a virtuous circle" between the financial sector and economic growth to implement leader Xi Jinping's " thought on the Socialist economy with Chinese characteristics for a new era," announced at the Communist Party's congress last month.
Clamping down on "irregular and illegal" activities in finance, Beijing will also reduce over-capacity in industry while also "tackling pollution" says Xinhua of what it calls today's "key" meeting.
The Yuan jumped to 3-month highs Wednesday against the falling Dollar, and "Gold buying accelerated after Shanghai opened with a strong premium," says a trading note from Swiss refiners MKS Pamp.
Shanghai premiums rose Wednesday towards $13 per ounce over London gold prices, some 40% above the average incentive for bullion imports into China.
The world's No.1 gold consumer nation, China now sees household gold demand peak at the Lunar New Year, falling in 2018 in mid-February.
US Treasury bond prices steadied this morning after their sharpest 2-day drop of 2017 to date, capping 2-year interest rates at 1.86% – the highest since before Lehman Brothers collapsed in autumn 2008 – with 10-year yields at 2.48%, offering the highest rate of return to new buyers since March.
Betting on US interest-rate futures now puts the likelihood of a March 2018 hike to 1.75% at nearly 2-in-3.
The chances of a further rise in June to 1.75% or above currently stand at 37.1% according to the CME's FedWatch tool.
The Euro single currency today touched last week's December high above $1.1850, curbing the gold price for German and French investors at €1067 per ounce, some €1.50 lower for the week so far.
The British Pound also neared 1-week highs against the greenback, trading above $1.35 after the European Union said the UK's period of "transition" in leaving the free-trade bloc must end by New Year 2021.
The UK gold price in Pounds per ounce held unchanged for this week so far at £943.