END_OF_DOCUMENT_TOKEN_TO_BE_REPLACED

GOLD PRICES slipped Monday against the rising US Dollar ahead of this week's key central-bank interest rate decisions, while strong retail demand for precious metals in China and India contrasted with speculators cutting their bullish bets on Comex futures and options to a 14-year low as gold ETF shareholders liquidated holdings for 6 months in a row, writes Atsuko Whitehouse at BullionVault.
Spot gold priced in the US Dollar edged $10 lower to $1635 before bouncing $5 per ounce, down 1.9% for October and making its 7th monthly drop in a row.
Gold prices for UK investors meanwhile rose to £1420 per ounce and the precious metal added €5 per ounce to €1657 for Euro traders as the US Dollar strengthened against major currencies with interest-rate traders positioned for a 4th consecutive hike of 75 basis points by the Federal Reserve this Wednesday amid inflation holding near the highest levels since the early 1980s.
European bourses were mixed as Eurozone GDP and inflation data, published Monday, showed economic growth slowing in Q3 but the cost of living soaring at a currency-union record of 10.7% in October.
Gold prices on the Shanghai Gold Exchange continued to show a premium to London, offering an incentive of $34 per ounce to new bullion imports even as the Yuan price fell to ¥392 per gram and the currency itself weakened to the lowest Dollar level since 2008.
"The high premiums indicate strong physical demand and the re-opening of the Chinese economy could still see stronger demand over the coming months," says Swiss bank UBS's analyst Giovanni Staunovo. 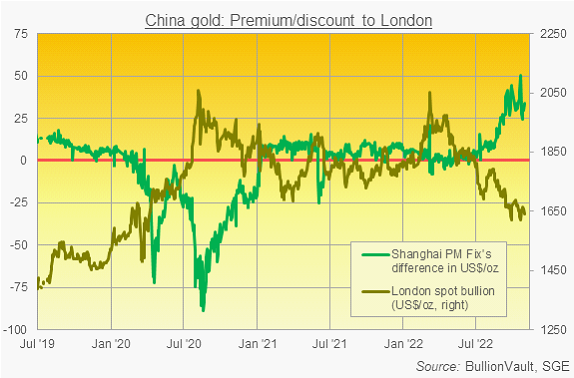 Wholesale bullion in the metal's No.1 consumer market has now shown a monthly average premium of $34 above London quotes in October, up from $32 in September and well above the historical average of $9 despite continued economic and social lockdowns due to the China's Covid Zero strategy.
Physical gold demand in India, the No.2 bullion consumer nation, also rose this month as the festival of Diwali sparked fresh demand last week.
"Retail demand gained momentum [last] week because of Diwali. Prices were also attractive," said Ashok Jain, proprietor of Mumbai-based gold wholesaler Chenaji Narsinghji.
Solid festive demand saw dealers charge premiums of up to $3.50 per ounce over official domestic prices – inclusive of 15% import and 3% sales levies – from around $2.50 premiums the previous week.
"Underground [physical] demand has not translated into higher gold prices because of ETF liquidation," said James Steel of bullion clearing bank HSBC on a review of this month's LBMA industry conference last week, pointing to strong gold demand in China and India.
"Where would gold have been without retail demand offsetting institutional selling?"
Gold-backed ETF trust funds continued to shrink last week as both the SPDR Gold Trust (NYSEArca: GLD) and the iShares gold ETF (NYSEArca: IAU) saw net investor outflows, liquidating 0.6% and 0.7% to the smallest since March and July 2020 respectively.
Both the GLD and IAU gold ETFs are heading for their 6th consecutive monthly liquidation.
Latest data also show that hedge funds and other leveraged speculators in Comex gold futures and options cut their bullish betting 3 weeks in a row, down to the notional equivalent of just 244 tonnes of bullion – back to the smallest since the 2008 financial crisis – in the week-ending 25th October, and grew their bearish betting for the 2nd week in a row.
Overall, that pushed the net position of Managed Money traders to the most bearish in 4 weeks, 61% larger than the prior week's net short.
Bond prices meantime fell again on Monday, pushing up the yield on 10-year US Treasuries to 4.04% following Friday's jump, sparked by both PCE inflation – the Federal Reserve's preferred measure – and the US employment cost index both matching strong forecasts.
Oil prices fell by more than $1 after weaker than expected PMI factory activity data out of China, but wheat soared over 6% after Russia pulled out of its grain-export agreement with Ukraine while Moscow attacked infrastructure and civilians in the besieged country following a "massive" drone attack on Russia's Black Sea fleet near Crimea.