END_OF_DOCUMENT_TOKEN_TO_BE_REPLACED

GOLD PRICES sank with US stocks and the bond markets, while the US dollar jumped, amid US inflation coming in hotter-than-expected to renew a 40-year high, writes Atsuko Whitehouse at BullionVault.
Key US inflation data released on Thursday and the so-called Core CPI that excludes food and energy rose 0.6% in September from the prior month and up 6.6% from a year earlier, exceeding the rate seen in March, hitting the highest levels since 1982, underscoring broad and elevated price pressures that are pushing the Federal Reserve toward yet another large interest-rate hike next month.
The overall US CPI decelerated from the previous month at 8.3% but a still-rapid 8.2% annual pace, more than 8.1% expected by markets. 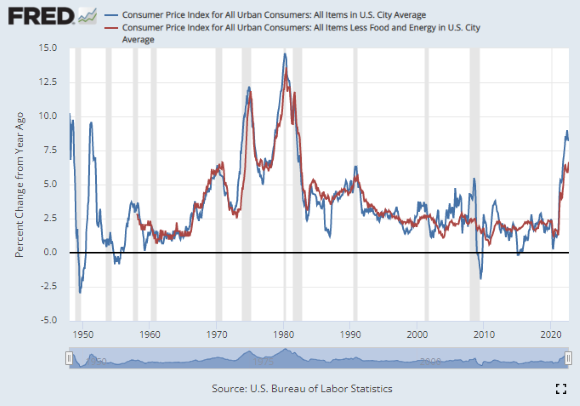 Spot gold dropped nearly $30 to $1645 per ounce, before paring some of the loss to $1648, reaching a 2-week low.
" Stickier than expected inflation, albeit by 0.1%, means that the Fed's future rate hikes will be more robust, which makes the dollar stronger, interest rates higher, and other assets weaker,” said Bruce Ikemizu, chief director of Japan Bullion Market Association.
“The asymmetric risk for the consumer price index print is the market is not ready for a large downside print,” Nicky Shiels, head of metals strategy at MKS PAMP SA, said in a note.
“To be clear, a print around 8% won’t be enough to halt the Feds hiking trajectory,” Shiels echoed.
The Dollar index – a measure of the US currency's value versus its major peers – surged 0.3% to the highest in more than 2 weeks, adding to its nearly 15% year-to-date gain.
Ten-year US Treasury yields – a benchmark rate for government as well as many finance and commercial borrowing costs – climbed to 4.028%, the highest since the global financial crisis in 2008.  Bond prices and yields are inversely related.
US stock futures plunged, as futures on the S&P 500 sank 2% after wiping out overnight gains to a two-year low, while those on the Nasdaq 100 dropped almost 3%.
Markets are now pricing in an 98% probability that the Fed will raise interest rates by another 75 basis points to a range between 3.75% and 4%, with a 2% expectation of a 100 basis points hike in early November.
The central bank is also now mostly expected to take its federal funds rate target to between 4.75% and 5.00%, or even higher, by next March, according to the CME FedWatch tool. 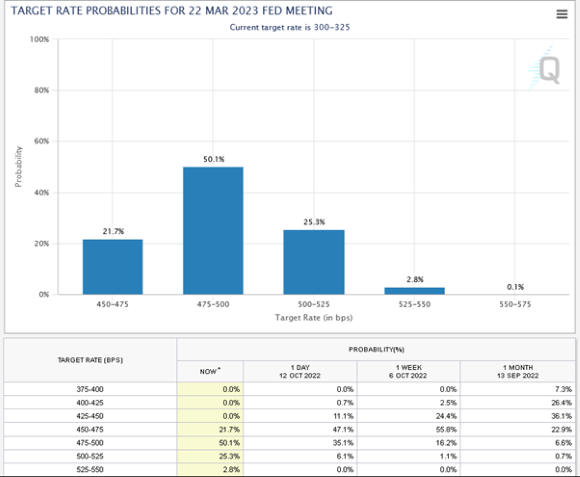 Since March the Fed has lifted a key short-term interest rate from near zero to an upper end of 3.25%, the most aggressive tightening campaign since the 1980s.  The central bank has indicated plans to raise the so-called federal funds rate to 4.4% by the end of the year and 4.6% in 2023, according to their median estimate released last month.
“Many participants emphasized that the cost of taking too little action to bring down inflation likely outweighed the cost of taking too much action,” according to the September meeting notes, which were released on Wednesday by the Federal Reserve, pointing out that inflation was declining more slowly than had been anticipating.
Treasury Secretary Janet Yellen said “In the United States, our top economic priority is to bring down inflation while maintaining a strong labour market,” in remarks to the Bretton Woods Committee’s International Council in Washington on Wednesday.
"Inflation may prove surprisingly persistent, prompting more aggressive tightening of monetary policy," said the Organisation for Economic Cooperation and Development (OECD) on Wednesday in a survey of the world's largest economy conducted every two years.
Gold priced in Euros meantime fell to a more than 1-week low at €1708. The UK gold price in Pounds per ounce dropped to 3-week low at £1474, as the pound jumped in FX markets on reports that the UK government may reverse parts of its tax-cutting mini-Budget, amid the UK government and Bank of England are at loggerheads.
The British pound traded 1.5% higher this Thursday afternoon, with the UK government's 10-year bond yield edging down after hitting the highest level since the global financial crisis in 2008 on Wednesday.
Chancellor of the Exchequer Kwasi Kwarteng said late Wednesday from Washington that any fresh turmoil in markets would be “a matter for the governor,” by pointing to the Bank of England being responsible if UK markets suffered renewed volatility after its bond -buying program ends on Friday.
This program was implemented to stabilize the British pound and the bond markets in late September after the so called mini-budget sent the country’s economy into turmoil.