END_OF_DOCUMENT_TOKEN_TO_BE_REPLACED

GOLD PRICES sank against a surging Dollar on Friday, dropping to new 2.5-year lows as this week's raft of central-bank interest rate hikes saw stock markets, bond prices, commodities and crypto all tumble while the US currency set fresh 2-decade highs on the FX market amid a bloodbath for the British Pound and UK government Gilts following a tax-slashing budget announcement.
Calling it a plan for "growth", the administration of new Prime Minister Liz Truss set out the biggest package of tax cuts in 5 decades, slashing receipts by £45 billion this year while vowing £60bn of spending support for home-and-business energy bills.
Already down to 1985 levels after the Bank of England raised its key interest rate by only half-a-point on Thursday in the face of 10% annual UK inflation, the Pound sank to fresh 4-decade lows against the Dollar today at $1.11, while a plunge in Gilt prices drove London's 5-year borrowing costs more than half-a-percentage point higher – a record 1-day jump – to more than 4.0% per annum.
Following yesterday's wild central-bank and FX action with fresh turmoil on Friday, gold prices for UK investors held above £1490 per ounce, setting the highest Friday finish since the 1st of July before adding another £10 as London trade drew to a close.
Gold priced in US Dollars in contrast sank to $1640, a fresh 29-month low, while the Euro gold price traded 1.2% above last Friday's 28-week closing low to reach €1689. 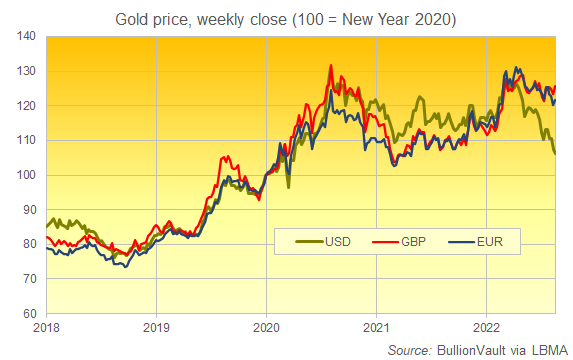 With US inflation showing surprise strength on August's data at 8.3% per year, the US Federal Reserve on Wednesday hiked its key interest rate by 0.75 percentage points for the 3rd meeting in a row, slashing its economic forecasts and raising its interest-rate outlook sharply for 2023 and 2024.
The Fed was joined by Switzerland in hiking by 0.75 points the next day, while Norway raised by 1 whole percentage point.
"Reducing inflation is likely to require a sustained period of below-trend growth, and there will very likely be some softening of labor market conditions," said US Fed chair Jerome Powell in this week's post-decision press conference.
"[Also, and so] that people can afford houses again, I think we probably in the housing market have to go through a correction."
Commodity prices sank worldwide on Friday, with European natural gas for December delivery down over 4% to the lowest since August as crude oil lost almost 6% to fall through $80 per barrel of US benchmark WTI.
While the surge in UK borrowing costs led the developed world yet again on Friday, bond prices sank and yields jumped across the board, taking benchmark US Treasury rates up to fresh 11-year highs while Germany's 10-year Bund yield broke above 2.0% per annum for the first time since December 2011.
The MSCI World Index of global stock markets fell more than 2.0% as New York opened, dropping through mid-June's trough to reach the lowest since November 2020.
So-called crypto currency Bitcoin meantime lost over 4% in Dollar terms to hit its lowest since late-2020, while Ether – which went through "the merge" to much fanfare last week – lost 3% to near June's 18-month lows.
Thursday saw giant gold-backed ETFs the GLD and IAU both shrink by another 0.2% as shareholders were net sellers, forcing liquidation of the trust funds' assets.
Silver prices also fell hard on Friday, losing almost 80 cents per ounce from last Friday but dropping only to 2-week lows at $18.80 and holding over $1 above start-September's 2-year trough.