END_OF_DOCUMENT_TOKEN_TO_BE_REPLACED

GOLD PRICES slipped as world stock markets rallied Friday and energy costs rose further, trying but failing to break above the $1800 mark in quiet trade as silver also fell and the platinum-group metals showed steep losses for the week.
Down $25 per ounce from last Friday's London benchmarking price of $1823, gold headed for its 1st weekly drop in 5 in US Dollar terms.
The Euro gold price neared its weakest Friday finish since mid-August at €1515, while the UK gold price in Pounds per ounce fell harder still as Sterling rose on the FX market despite weaker-than-expected GDP data, hitting new 3-week lows Friday at £1290.
Silver also struggled to rally from this week's retreat, trading 75 cents lower at a little above $24 per ounce.
"Gold has seen a series of disappointments," says a strategy note from Swiss refining and finance group MKS Pamp, pointing most of all to the precious metal's " failure to rally with plummeting [bond] yields earlier this summer [and] the latest reversal at $1830 after [last Friday's weak] NFP [US jobs data]."
"There's also been chatter that [mining] producer-related selling was evident recently, and likely took some time for the market to digest the flows.
"That, together with scrap selling & a lack of [new] investor subscription, caps any rallies above $1800, while dips below $1800 have been capitalized on by structural players and some physical interest."
August saw gold-backed ETF investment trust funds shrink to their smallest size since May on data compiled by the mining industry's World Gold Council. 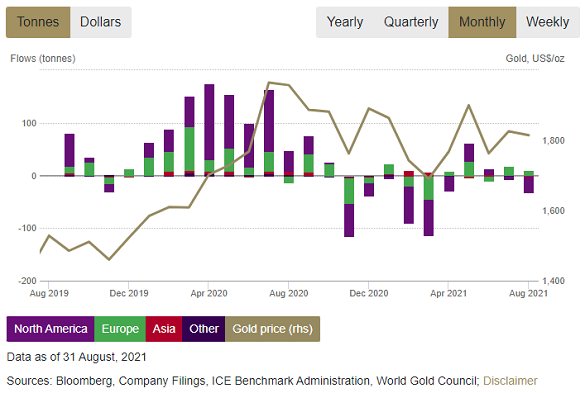 The platinum group metals have also seen producer selling, MKS goes on, squashing prices as "there is no or very limited auto demand due to the chip shortage, [which is] clearly more severe than markets anticipated."
Used primarily in catalysts to reduce harmful emissions from gasoline engines, palladium sank Thursday, heading for a 9% weekly loss in Dollar terms today.
Needed for diesel-engine autocats, the price of platinum meantime continued to trade at 3-week lows near $980 per ounce.
"Both [metals] have gotten hammered this week," says one analyst to Bloomberg, "[and] we have to suspect that difficulties in the global auto sector must be weighing on PGM demand."
Vehicle sales in China – the world's largest car market – sank almost 18% last month from August 2020, falling for the 4th month running as the shortage of microchips hit production according to the China Association of Automobile Manufacturers (CAAM).
Ahead of the summer, the world's post-Covid recovery saw a bounce in auto demand for platinum boost global demand by nearly 1/4 in April-June compared to the crisis-hit second quarter of 2020, new data from the mining industry's World Platinum Investment Council showed this week.
But a "boost from faster processing of 2020 plant outage backlog" also saw supply of platinum jump by 55%, putting the market into a small surplus of supply over demand most likely for all of 2021.
"The short-term view for PGMs is still fragile," says MKS, "but the markets are getting to the point where precious metals are so underloved, which is usually the best entry point."
With inflation in the cost of living already setting decade-highs across the 19-nation Eurozone this summer, natural gas prices in Europe today jumped again to set more new all-time highs.
Food costs in China – the world's No.2 economy – are meantime being driven higher by record prices for fish, Reuters reports, offsetting the steep retreat in pork prices since the staple meat trebled in cost on 2019's African swine flu outbreak.