END_OF_DOCUMENT_TOKEN_TO_BE_REPLACED

GOLD PRICES slipped back below $1200 per ounce in London on Thursday afternoon as new US data put inflation up in line with the Federal Reserve's official target for the first time since spring 2012.
The personal incomes and outlays report for July said the cost of living rose 2.3% per year, just ahead of analyst forecasts, with the Fed's preferred measure of "core PCE" prices reaching 2.0% annual inflation.
Silver lagged the earlier rally in gold prices, holding almost 1% down from last Friday's finish before dropping again towards $14.50 as the yellow metal fell to $1197.
The PCE inflation news saw the Dollar pause this week's retreat from mid-August's 17-month peak while US stockmarkets joined global equities in falling back from new record highs after President Trump again praised this year's rise ahead of the long Labor Day weekend.

The news from the Financial Markets is even better than anticipated. For all of you that have made a fortune in the markets, or seen your 401k’s rise beyond your wildest expectations, more good news is coming!

With gold prices down nearly 8% for 2018 so far, "US-China trade tensions and US interest rate expectations remain the key drag on the yellow metal," says the latest weekly note from specialist analysts Metals Focus.
Betting on next month's Federal Reserve meeting puts near-certain odds on a rate rise to 2.00%, but betting on the Fed voting to keep rates there in December – rather than hiking again – has edged up from 27% to 31% since this time last month according to data from the CME derivatives group.
Policymakers should keep the economy's current position "firmly in mind" when assessing risks and uncertainty, says a Fed research paper published this month, suggesting a more aggressive rate-rising policy amid this summer's raft of strong US data.
A rise in US house prices to new all-time highs however – breaching the peaks immediately prior to the subprime and then global financial crash of a decade ago – has now coincided with 7 months of falling demand from the same period last year, new figures showed Wednesday. 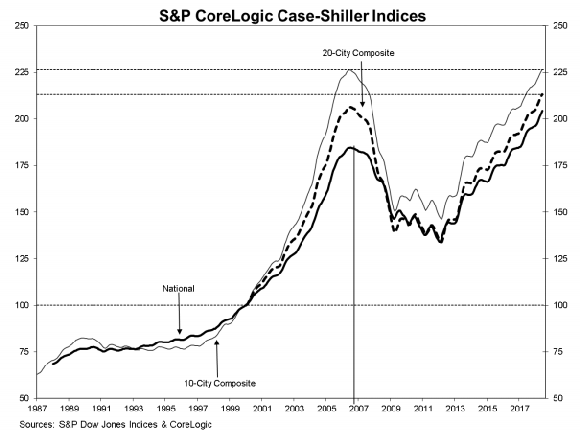 "Resistance [in gold prices] remains unchanged at $1213.20," said  a technical note from bullion bank Scotia Mocatta's New York office overnight, pointing to "the 50% Fibo retracement level of the July high-to-August low range.
"Support [was] firm at $1200.70" on Wednesday it said, "[but] momentum remains negative."
In Asian trade Thursday, "We are seeing selling from the Chinese banks," said a note from Swiss refining and finance group MKS Pamp's trading desk, with the Dollar's rise versus the Yuan "helping put gold under pressure."
Shanghai premiums, over and above London quotes, slipped back beneath $7 per ounce after rising near more typical incentives for new imports into the No.1 consumer market for the first time in a month on Wednesday.