END_OF_DOCUMENT_TOKEN_TO_BE_REPLACED

GOLD PRICES jumped back towards its highest in 3 weeks at $1809 per ounce Friday afternoon in London after US Fed chief Jerome Powell gave a dovish outlook for monetary policy in his much-anticipated Jackson Hole speech on the economy and inflation.
Repeating that the Fed's overnight Dollar interest rate won't rise from zero any time soon, Powell confirmed that QE tapering is "coming" but failed to give any specifics or hints about timing.
Gold initially sank to $1787 as the Federal Reserve chairman began his speech, before rising, falling and then jumping again during his comments.
The silver price also rose as Powell finished speaking, touching its highest Dollar value since 9 August at $24.00 per ounce, while government bond prices rose – pushing long-term borrowing costs lower – and Western stock markets turned an earlier loss into a small gain.
"Strong policy support has fueled a vigorous but uneven recovery," said Powell, with 2021's economic bounceback fuelling a surge in demand, most especially for durable goods – now running "20% above pre-pandemic levels".
This has created "shortages and bottlenecks" the Federal Reserve chief said, leading to "elevated inflation" which he still believes to be "transitory".
US inflation last month rose to 3.6% per year on the core PCE measure – a fresh 30-year high – according to new data released just before Powell spoke.
With longer-term interest rates hugging historic lows as the Fed continues buying $80 billion in US Treasury debt and $40bn of mortgage-backed bonds each month, that puts the current real rate of interest on Washington's 10-year notes at its most negative ever outside the record low of New Year 1975. 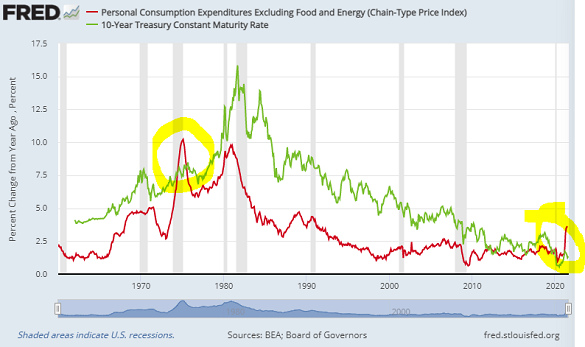 Like the Dollar price, gold in terms of the 19-nation Euro rose to show a 0.8% rise from last weekend's level, trading up to €1533 following Powell's comment.
Gold priced in the British Pound was also volatile during the Fed chairman's Jackson Hole speech, but showed only a 0.5% gain for the week at £1314 per ounce.
"The timing and pace of the coming reduction in asset purchases will not be intended to carry a direct signal regarding the timing of interest rate liftoff," Powell said without giving any further indication or forecasts for either.
Repeating the Fed's core policy goals – and naming "maximum employment" ahead of "price stability" – Powell blamed the summer 2021 surge in US inflation data to "inevitable stresses and strains" as the economy re-opens from the Covid shutdowns, because demand is outstripping "pandemic-hit supply".
The Fed's policy committee "remains steadfast in its commitment to supporting the recovery," he went, and while its emergency pandemic stimulus' stated aim of "substantial progress" towards 2% annual inflation "has now been met" on current data, there is still "much ground to cover" on jobs.
"I believe policy is well positioned," he concluded.
Ahead of Powell's comments on tapering and inflation, "Jackson Hole [was] likely to be a nonevent," said a note from Swiss refining and finance group MKS Pamp overnight, on which "financial markets seem[ed] to be overly concentrated."