END_OF_DOCUMENT_TOKEN_TO_BE_REPLACED

GOLD PRICES broke through $1200 per troy ounce, an 18-month low at Monday lunch time amid Turkish crisis pushing the dollar to a 13-month high and ripping through emerging markets currencies as Recep Tayyip Erdogan, Turkey’s president hit out at the US, writes Atsuko Whitehose at BullionVault.

Dollar index (DXY), measuring the value of the Dollar against a basket of six foreign currencies, surged to 96.4070, its highest level since June 2017.  Safe heaven demand for Japanese Yen and Treasuries also rose.  The Japanese Yen strengthened against all major currencies, trading 0.4% up to 110.37 per Dollar, the strongest in seven weeks and the yield on 10-year US Treasuries declines to 2.87 percent, the lowest in more than three weeks.

Global markets opened Monday braced for another hectic day of trading amid Turkey’s unfolding economic crisis, after the country’s currency, the lira, plunged 20% to record lows on Friday following President Donald Trump authorizing a doubling of steel and aluminium tariffs on Turkey and warned that US relations with the country "are not good at this time."

President Erdogan remained defiant over the weekend, accusing foreign interests of waging an economic war against Turkey, and pledging trade measures to reduce reliance on the Dollar and US markets on Saturday.

The Turkish government then announced limits on currency swaps on Sunday night and following this a large Turkish bank, Garanti, said it would not allow customers to open new foreign exchange positions, making it harder for people to sell Lira for US dollars, pounds and euros.

The Lira pulled back this morning from an overnight record low of 7.24 to the dollar after the central bank pledged to provide liquidity and cut Lira and foreign currency reserve requirements for Turkish banks, although the currency has lost already 43 percent of its value in 2018.

The Turkish central bank has offered no indication that it will raise interest rates to combat high inflation, now reaching over 15%.

“It’s a textbook crisis – for many years everybody had said Turkey was a weak country due to its large external debt and current account deficit,” said Guillaume Tresca, senior emerging markets strategist at Credit Agricole.

“There is nothing surprising other than that the central bank is not really reacting. They issued this new plan but there is no tightening of financial conditions – they are completely behind the curve.”

“The European Union’s financial watchdog [has] expressed concern about EU financial exposures to Turkey. And so, if it is a concern for this institution, then it should be for traders too,” Chris Weston, of online trading firm IG Market in Melbourne warned.

The Euro hit a one-year low of $1.1363 as investors feared that the Turkey's financial crisis could spread to European markets.

The Indian Rupee hit an all-time low of 69.62 against the US Dollar in morning trade.  South Africa’s Rand skidded to levels not seen since mid-2016 and Russia’s Rouble slumped to a near 2-1/2 year low.  China’s Yuan weakened 0.5 percent - its steepest daily decline in nearly four weeks.

“China’s economy is now slowing, emerging markets are now tightening monetary policy and the trade war is escalating. This could worsen investor sentiment towards emerging markets and also strengthens our view that emerging-market growth will weaken.” William Jackson, chief emerging-market economist for Capital Economics in London, said in a note.

MSCI Emerging Markets index fell 1.8%, close to the low not seen in over a year.

Latest data from US regulators say that hedge funds and other large speculators grew their net bearish position on Comex gold futures and options to a new series record again last week.

The net short position of Managed Money increased 54% from the previous week to 196 tonnes.  The short positions were more than 5 times the average since the CFTC began collecting these figures. 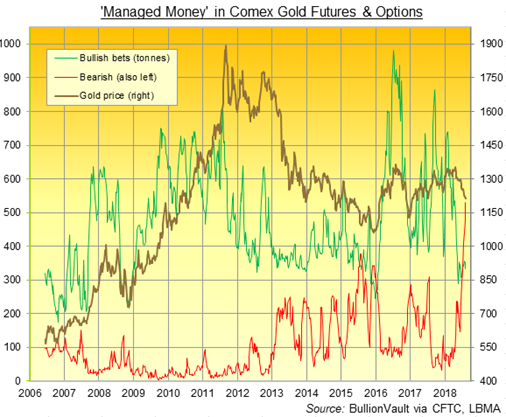 The largest gold-backed ETF, the giant SPDR Gold Shares (NYSEArca:GLD) shrank 8.9 tonnes to 786 tonnes during the week starting 6th August.  The holding is at its lowest since end of Feb 2016.  It is down 11% since the peak of 2018 on 30th April soon after Syrian tensions receded.