END_OF_DOCUMENT_TOKEN_TO_BE_REPLACED

GOLD PRICES sank 1.6% in London trade lunchtime Friday, snapping a 6-week surge to drop below $1400 per ounce as US jobs growth came in way ahead of Wall Street forecasts and India raised its rate of gold import duty, stunning the No.2 consumer nation's domestic jewelry industry.
Non-farm US payrolls expanded by 224,000 net of job losses in June, the Bureau of Labor Statistics said just as New York trading re-opened after the 4th July Independence Day holiday.
With the unemployment rate edging higher to 3.7%  – still near its lowest since the 1969 Apollo Moon landing – last month's addition beat analyst expectations by two-fifths.
Losing nearly $20 from last Friday's finish, gold headed for its first weekly drop in Dollar terms since mid-May at $1390, hitting its lowest since Tuesday as the US currency rose on the FX market.
Euro and UK gold prices per ounce held firmer but still erased last week's gains to 6- and 7-year highs respectively.
Indian gold prices in June set their 2nd highest month average ever, costing more than INR33,000 per 10 grams even before accounting for the 10% import duty imposed by New Delhi's previous Congress Party government in 2013 to try and curb demand, stemming the country's then large current account deficit with the rest of the world.
Smuggled gold – known as "unofficial imports" by bullion analysts – last year accounted for 15% of total gold inflows to India, the metal's No.2 consumer nation, according to estimates from consultancy Refinitiv.
Representatives of the country's huge gold, gems and jewelry sector – employing perhaps 4 million people – have long hoped that the BJP Government of Narendra Modi would cut the rate of import duty after his 2014 and now 2019 election victories. 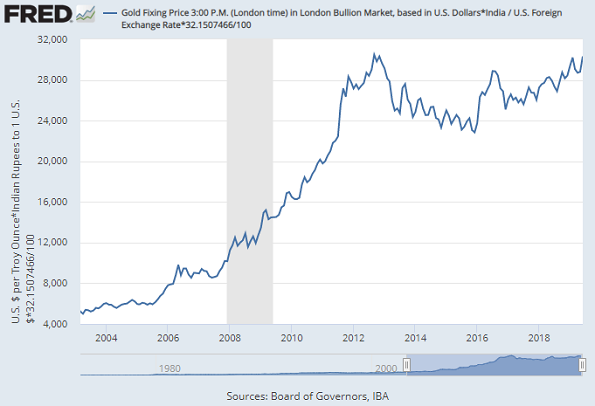 Ahead of today's new post-election Budget, India's gold derivatives trading "was anticipating cut by 2%" noted Sudheesh Nambiath, head of the India Gold Policy Centre.
Instead, Modi's new finance minister Nirmala Sitharaman raised the rate on bullion to 12.5%.
"This contradicts industry expectations of gold policy reforms aimed at ease of business," tweeted Somasundaram PR, managing director India at the mining industry's World Gold Council.
"May hurt employment and export potential of the industry. Will likely be a huge disincentive to the transparency measures increasingly embraced by the trade."
"We are very much disappointed," said Anantha Padmanaban, chairman of the All India Gem & Jewellery Domestic Council, "[because] we were all awaiting for a reduction from 10% to 6% or 4%."
Announcing a joint representation with the India Bullion & Jewellers Association (IBJA) and Gem Jewellery Export Promotion Council (GJEPC) to lobby for an immediate rollback, "Smuggling will become stronger," the GJC chairman added, "[and] retailers will go to the grey market."
Just last month, Prime Minister Modi's office wrote to the GJEPC to thank the association for its support in his second election victory, promising to "provide progressive development-oriented and corruption free governance to build a strong, prosperous and inclusive India."
Despite gold in Indian Rupee terms currently setting new records as Dollar prices reach 6-year highs, shares in leading retailer PC Jeweller (NSE: PCJEWELLER) today fell over 5% to close at their lowest since 2013.
India's No.1 gold outlet Titan (NSE: TITAN) – owner of jewelry brand Tanishq – closed 4.3% below June's new all-time high, losing just 1.0% for the day, less than many of its sister organizations in the giant Tata Group of companies, as the Mumbai stock market also fell following the new Union Budget.
After Modi's shock 2016 demonetisation of large-denomination banknotes in late-2016 – now widely seen as failing to uncover untaxed wealth or block corrupt payments – today's Budget also imposed a 2% tax on large cash withdrawals from bank accounts, effectively giving a tax advantage to so-called "digital payment" providers.