END_OF_DOCUMENT_TOKEN_TO_BE_REPLACED

GOLD PRICES missed out on a wider rally in commodity prices Tuesday in London, slipping back to unchanged for the week so far while copper rose with global stock markets following the relaxation of Covid rules in China and crude oil rose following a gaffe over the Middle East hitting "maximum capacity" by French President Emmanuel Macron.
Longer-term borrowing costs also rose as Eurozone central bank chief Christine Lagarde vowed "determined action" against inflation – now above 8% per annum – while keeping deposit interest rates at minus 0.5% until next month.
With the USA now a month into 'driving season' – the northern hemisphere's annual summer peak for gasoline and diesel demand – as the G7 group of nations look to tighten sanctions against energy-and-mining giant Russia over its invasion of Ukraine, "I had a call with MBZ" Macron on Monday told US President Joe Biden in front of journalists at the G7 summit in Schloss Elmau, southern Germany.
Apparently referring to Sheikh Mohammed bin Zayed al-Nahyan – President of the United Arab Emirates – "he told me [UAE oil production capacity is] at a maximum, maximum.
"Second, according to MBZ, the Saudis can increase [only] a little bit...They don't have huge capacities at least before six months' time."
"Careful," interrupted a White House official. "Maybe we should just step inside...because of the cameras." 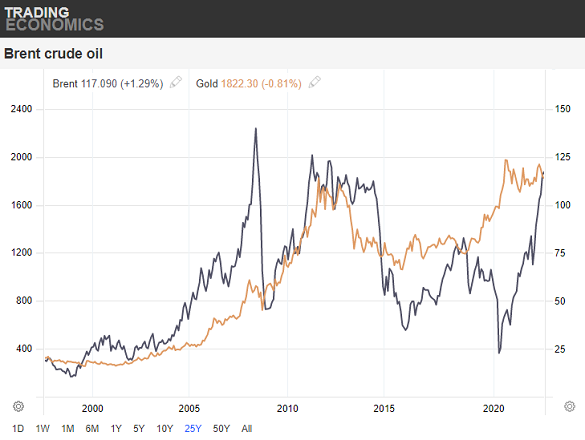 Crude oil rose Tuesday to trade at $117 for European benchmark Brent, $10 per barrel above last week's 1-month low.
This time last year Brent cost $75 per barrel.
Copper prices meantime rose further from Friday's new 16-month lows after world No.2 economy and No.1 manufacturing hub China reported zero new Covid infections in Beijing or Shanghai and eased its anti-pandemic restrictions on travellers and close contacts of confirmed cases.
That news saw China's stock market extend its rebound from 2-year lows, taking the CSI300 index's gain for the last month to 12.2%. But copper's 1.9% rally today still left it more than 1/5th below early March's record high, hit as gold set new all-time Euro and UK Pound records amid Russia's latest invasion of Ukraine.
"Gold [now] remains a traders' market," Reuters quotes one spread-betting brokerage's analyst, "vulnerable to false breaks and quick turnarounds on little news.
"This means range-trading strategies are preferred until we see a catalyst which instils some life back into [the] markets."
Gold priced in the Dollar today peaked at $1826 before edging back $4 per ounce.
Longer-term interest rates meanwhile rose to 1-week highs in the bond market, with the yield on 10-year US Treasury debt reaching 3.24% per annum.
A new decade high when first reached earlier this month, that is still a quarter-per-cent below mid-June's peak.
So-called real interest rates also rose, with the yield on 10-year inflation-protected Treasury bonds trading at 0.67% per annum – down 0.2 percentage points from the peak of a fortnight ago but holding levels not seen since spring 2019.
"Traders price in first 50 basis-point hike by South Korea," says a Bloomberg headline, pointing to bond-market action ahead of next month's central bank decision in Asia's 4th largest economy.
Having raised overnight rates in 25bp increments to 1.75% – the highest since 2019 – South Korea now faces its worst consumer-price inflation since 2008 at 5.4% per year.
Last week saw 5 central-bank rate rises in 10 policy decisions worldwide, with no change from the People's Bank of China at 3.7% as inflation held at just 2.1% but a shock hike of 125bps by the Czech Republic to 7.0% as inflation tops 16%.
Iceland meantime hiked by 100bps to 4.75% (inflation now 7.6%), Mexico hiked 75bps to 7.75% (inflation now holding at 7.6%), Norway hiked 50bps (first time since 2002) to 1.25% (inflation now 5.7%), and Philippines raised 25bps to 2.5% (inflation now 5.4%).
"Gold is in competition with other investments like money market instruments," says analyst Peter Fertig of Quantitative Commodity Research.
"If interest rates are rising because of the higher inflation rates, then the attractiveness of investing in goal is reduced."
"Inflation in the Euro area is undesirably high and it is projected to stay that way for some time to come," said European Central Bank chief Christine Lagarde today, opening the ECB's annual monetary policy forum in Sintra, Portugal.
"We need to act in a determined and sustained manner," she went on.