END_OF_DOCUMENT_TOKEN_TO_BE_REPLACED

GOLD PRICES edged above last week's closing level Tuesday as London returned from the long Easter weekend, trading up to $1738 per ounce as the US Dollar slipped on the currency market and European stock markets rose to a new record high despite the worsening wave of Covid-19 infections and deaths.
With France now in its 3rd national lockdown and Germany's Chancellor Merkel pushing for stricter rules, China yesterday saw its worst daily infection count for more than 2 months, while a new variant in Japan was blamed for the fast-worsening outbreak in Osaka.
India is suffering "much, much worse" in its 2nd wave with hospitals across Maharashtra – the sub-continent's wealthiest region – running short of beds and supplies.
"The catastrophic Brazilian response to Covid-19 may amount to a crime against humanity," says an opinion article at the British Medical Journal.
China and Japan's stock markets fell Tuesday, but India's BSE Sensex held flat some 6% below mid-February's new all-time high.
The EuroStoxx 600 index meantime edged above its prior peak of February 2020, eve of the global SARS-CoV-2 pandemic, as European bond yields ticked higher but US borrowing costs slipped, taking the 10-year Treasury rate down to 1.69% per annum.
Fully 1 percentage point higher from this time a year ago, that is 5 basis points below last week's new 14-month high. 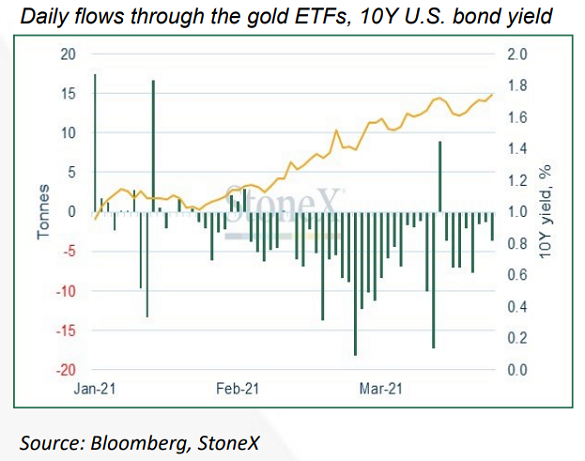 "Some investors have retreated from the gold market on the back of rising [bond market] rates," says analysis from Rhona O'Connell at brokerage StoneX, "even though the world’s major central banks have consistently reiterated their intentions to keep policy rates more or less at rock bottom.
"This and the daily evidence of redemptions in the gold ETFs has helped to cloud sentiment, while in the Gulf and Asia, physical markets have at last picked up."
Giant US-listed gold ETF the GLD marked its 12th consecutive weekly decline ahead of Easter, but closed Monday unchanged in size at its smallest since April last year.
Latest data from US regulators says hedge funds and other speculative traders meantime cut their bullish betting on Comex gold futures and options by almost 1/10th net of that group's bearish bets, reversing the previous 2 weeks of growth.
Gold prices in China have so far averaged $6.30 above London quotes, down from last week's premium of $8.80 per ounce but continuing to signal a recovery in demand versus supply in the metal's No.1 consumer nation after last year's Covid collapse.
India's gold imports leapt to a monthly record in March says Reuters, quoting a "source", jumping 471% from a year earlier to 160 tonnes.
"Many consumers had postponed buying due to higher prices," says a Kolkata wholesaler.
"They rushed to buy after prices corrected sharply."
Giant Australian refiner the Perth Mint says it sold a quarterly record of gold and silver as retail investment products in the first 3 months of this year.
Data from the US Mint are more "mixed" says a coin collectors blog, but Q1's sales of gold American Eagles were still 83.8% ahead of the first 3 months of 2020.
Net gold investment on BullionVault last month fell 96% from the prior 12-month average however, with a drop in buying outpacing a slowdown in selling.
Back in the US, and after Friday's blow-out employment report, when the first official estimate said the world's largest economy added over 900,000 jobs in March, yesterday's ISM activity reports said both manufacturing and services continued to rebound last month, with factories growing the fastest since the end of the 1983 recession while the prices paid by factory managers held at the highest since 2008.
Despite beating analyst forecasts by almost 50%, last month's strong jobs growth still left non-farm payrolls 6.2% smaller from February 2020's record high.