END_OF_DOCUMENT_TOKEN_TO_BE_REPLACED

GOLD PRICES steadied above this week's 9-month lows against a rising US Dollar in London on Thursday, trading at $1715 per ounce as the slump in government bond prices also took a pause, stemming the surge in longer-term interest rates.
Ten-year US Treasury yields slipped back to 1.47% after making their steepest 8-week rise since 2018 so far this year, surging by over half-a-percentage point.
The pause in rising yields has come as inflation expectations have stabilised around 2.2% on 10-year forecasts in the bond market.
Adjusted by those forecasts, the real 10-year US yield today slipped back to -0.76% per annum, markedly below last Thursday's spike to the least negative since June at minus 0.60%. 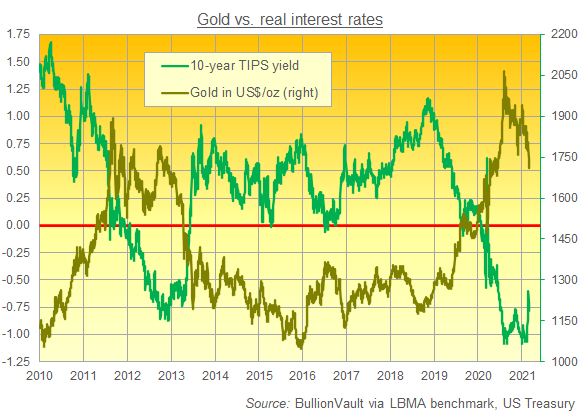 "It is the US 10-year yield that's driving gold at the moment," says brokerage StoneX's chief analyst Rhona O'Connell, "and we would argue that the market is taking too short-term a view and that the excess liquidity in the system remains medium-term supportive.
"At the start of 2013" – the year that a 'Taper Tantrum' in bond yields saw gold's worst price drop in 3 decades – "the Fed balance sheet stood at $3.99 trillion. It currently stands at $7.53tn and the IMF estimates that the global injection of liquidity in 2020 was over $12tn."
"We are already seeing undesirable contagion from rising US yields into the Euro area yield curve," said European Central Bank policymaker Fabio Panetta on Monday, demanding that the move be "resisted" because "if unaddressed, this would lead to a tightening of financing conditions that is inconsistent with our domestic outlook and inimical to our recovery."
Other ECB officials disagree however, with Mario Centeno of the Banco de Portugal saying the 19-nation currency union's existing tools "are working very well, preserving favourable financing conditions" even though the yield curve has steepened sharply so far in 2021.
While costs for US factories jumped in February to their highest since 2008 on the ISM Prices Paid index, European manufacturing and services activity both shrank again in February, this week's Markit PMI surveys said.
Two-year US inflation swaps yesterday reached 2011 levels above 2.4% per annum but core US inflation has so far risen only to 1.7% on the Dallas Fed's latest analysis.
The Eurozone's cost of living is meantime rising by 0.9% per annum on EuroStat figures, very nearly the same rate as 12 months ago, but Germany's 10-year borrowing costs have jumped by 1/3rd of a per cent since then to minus 0.31%, the least negative since New Year 2020.
Analysis by Bloomberg now "suggests that the bond market may be close to over-shooting," O'Connell at StoneX goes on, noting how losses in bond prices so far in 2021 are approaching the historic maximum for a quarterly drop.
"It is abundantly clear that the Fed is very far from raising rates and this, too, therefore points to a likely rebalancing in the foreseeable future."
"We're not going to react at the first hint that inflation might have breached the 2% goal," confirmed  San Francisco Fed president Mary Daly on Wednesday.
"Our most important virtue will be patience."
"You know, 2.5% inflation – that doesn't worry me," agreed Chicago Fed chief Charles Evans in separate remarks.
"And 3%, let me see what 3% is."
Gold prices outside the Dollar also stemmed their 2021 falls on Thursday, capping the drop at 12-month lows for Euro and UK investors at €1411 and £1221 respectively.