END_OF_DOCUMENT_TOKEN_TO_BE_REPLACED

GOLD PRICES rallied from 2-week lows against the US Dollar in London trade Wednesday, edging back above $1550 per ounce as world stock markets struggled for a second day after setting yet another all-time record high on the MSCI index.

After US consumer-price inflation, excluding volatile fuel and food, yesterday came in at 2.3% per year for 2019 as a whole – unchanged from the pace in 2018 – the UK's official inflation rate today showed a slowdown to 1.8%, while France's slipped to 1.5% and Spain's sank to 0.8% annually. 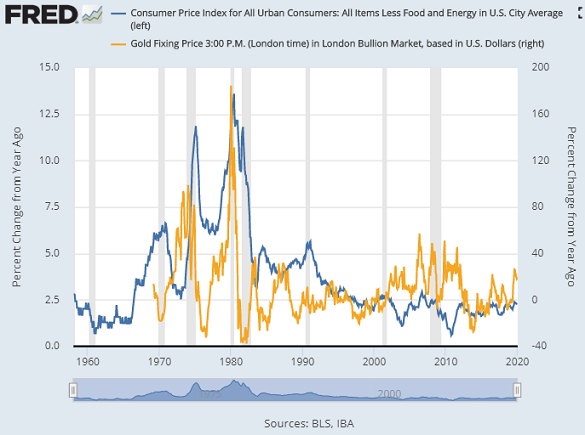 "There will no longer be an attempt by any of the developed world's major central banks to normalise interest rates," today's Financial Times quotes Greg Jensen, co-chief investment officer of $160bn hedge fund Bridgewater.

For gold prices, "That's a big deal," Jensen says, forecasting a rise to $2,000 per ounce and advising investors to make bullion a 'cornerstone' of their portfolios because with geopolitical risks rising – and the last decade's boom in US asset prices now likely to fade – "the Fed won't be pre-emptive" in trying to stem rising inflation.

That would cut the real rate of interest, seen as a prime mover for underlying gold prices.

Cutting US Dollar interest rates 3 times in 2019 despite inflation in the cost of living holding firm, Fed chairman Jerome Powell said last month that "In order to move rates up, I would want to see inflation that's persistent and significant."

With gold prices already setting 7-year US Dollar highs this January, plus new all-time record highs in a raft of other currencies, "[Miner] producer selling might help rein in the rally in the near term," said a note last week from Swiss bullion bank UBS, "but we do not expect it to derail the broader uptrend especially if macro factors" – such as negative real rates, a weaker US Dollar and geopolitical tensions – "continue to move in gold's favor.

"On the flip side, softer data in the US – as our economists expect – would be a tailwind for gold."