END_OF_DOCUMENT_TOKEN_TO_BE_REPLACED

GOLD PRICES fell Friday in London even as infections, deaths and economic lockdowns in the winter wave of Covid-19 worsened worldwide and new US data said the world's largest economy shed jobs last month rather than expanding as Wall Street expected.
Against consensus forecasts of 71,000 growth, the Bureau of Labor Statistics estimates that US non-farm payrolls shrank by 140,000 in December.
Average earnings however rose faster for those people still in work, accelerating to an annual pay-rise of 5.1% compared to 3.0% in December 2019.
"Grim jobs data spur stimulus bets," says a headline at Bloomberg as US equity futures rose ahead of Friday's opening.
"Stocks roar on stimulus bets," the news-wire said of yesterday's action, when the tech-heavy Nasdaq index rose 2.5% to close at a new all-time high after Joe Biden's election victory – now cemented with Democrat control of both the Senate and Congress – was confirmed following Wednesday's pro-Trump rioting in the Capitol, from which 5 people have now died.
"It's a new age of terrorism that can't exist without the internet," says one analyst of political extremism – quoted by the Washington Post as other mainstream news-sites also picked through Q-anon and other 'far right' themes and memes Friday – "[and] the movement has a spiritual leader, which is Trump."
Having plunged $30 per ounce at the start of Friday's London trade, gold priced in the Dollar fell another $5 to touch 1-week lows at $1876 before rallying to $1890.
Bond yields were little moved by the jobs data, leaving the rate of interest on 10-year US Treasury debt at 10-month highs above 1.00% per annum while market-implied inflation rose above 2.10%.
That put the real rate of interest at minus 1.04% – very near the multi-decade low which coincided with gold's new record peak above $2000 per ounce in August.
Crude oil meantime extended its rise to 10-month highs after the Opec+ cartel of producer nations agreed this week to new output cuts.
Base-metal copper – often seen as a bellwether of economic growth – meantime hit fresh 8-year highs. 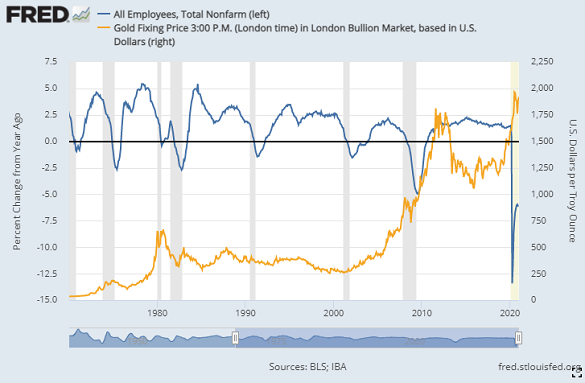 "In the wake of the [jobs] data it's clear the US is heading back into recession," reckons French investment bank Societe Generale's inhouse 'perma-bear' Albert Edwards.
"Companies and investors (esp bonds) are 'looking through' this dip. But a likely spread of the Covid19 super-contagious B117 strain, discovered in the UK, will change everything."
Two years ago – and with the S&P500 index more than 25% below yesterday's fresh record high – "the economic cycle is deteriorating sufficiently rapidly that it is about to crush equity portfolios," Edwards wrote.
Last spring's Covid Crash was then followed by a "normal 50% retracement" Edwards said, predicting that US central bank the Federal Reserve would buy S&P ETF trust funds to support the market "but even that would not spell the end of the bear market."
"The firmer Dollar and higher [nominal bond] yields created headwinds for gold," says a trading note from Swiss refining and finance group MKS Pamp, "[but] conditions remain constructive for the metal over the near to medium term...[as] $1850 looms as a hard support."
Both Tokyo and London today declared 'major incidents' in the worsening winter wave of Covid-19, while Los Angeles reporting more deaths from the virus in 1 day than homicides across the whole of 2020.