END_OF_DOCUMENT_TOKEN_TO_BE_REPLACED

GOLD PRICES sank to 5-week lows of $1760 per ounce at the start of New York trade Thursday, falling through £1300 for UK and €1500 for Euro investors after new US data pointed to a strong jobs market ahead of next week's Federal Reserve decision on QE tapering.
With last week's initial claims for jobless benefits coming below analyst forecasts, government bond prices also fell, pushing longer-term interest rates higher, but a fall in Asian stock markets didn't carry into European or US equities.
Like gold prices, silver also fell hardest against the rising US Dollar, dropping 3.3% for the week so far to touch $23.00 per ounce in London's spot market, its lowest since mid-August's 'flash crash' to 2021 lows.
Also finding the bulk of its demand from industrial uses, platinum meantime bounced from yesterday's touch of new 10-month lows beneath $925.
"The shortage of semiconductors is clobbering the price of platinum-group metals," says Bloomberg today, "as investors brace for a long-lasting hit to car production."
Both rhodium and palladium have now sunk to their cheapest in over a year, with Rh losing 60% from March's new record and Pd dropping almost 1/3rd from May's $3000 peak.
Sister-metal platinum – still currently finding its single largest use in diesel-engine autocatalysts to reduce harmful emissions, but also vital to the growing hydrogen economy – last night touched a new 10-month low, down 30% from February's spike to 6-year highs.
That put platinum at its widest discount to gold prices since New Year, trading $860 per ounce below the less industrially-useful but historically monetary metal. 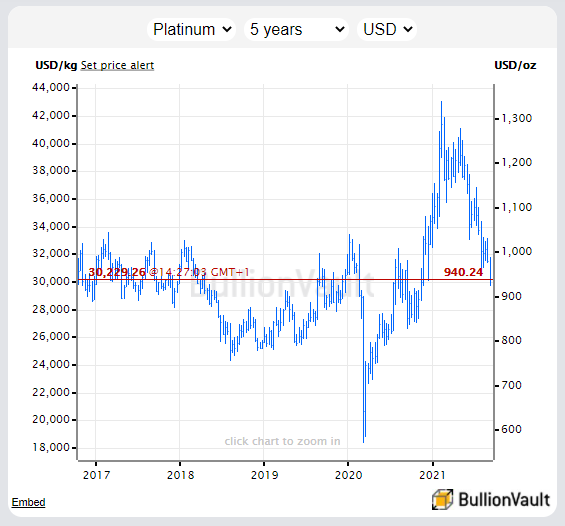 Major gold-backed ETF trust funds were quiet again Wednesday, with trading in the giant SPDR product (NYSEArca: GLD) only 70% of recent averages, with net liquidation by investors of 0.2% on the day.
Today's drop in global quotes for gold settled in London – heart of the physical bullion market – was reflected by prices in China, the metal's No.1 consumer nation, with Shanghai's benchmark falling 0.8% from Wednesday.
But strength in the Chinese Yuan, now at 3-month highs versus the US Dollar, helped the Shanghai premium over London quote rise to the strongest in almost a month at $7.50 per ounce.
Prior to the Covid Crisis, that incentive for new imports to China averaged $8.85 per ounce. It crashed to hit a record discount of more than $85 in summer 2020, as domestic demand evaporated in the face of lockdowns and global gold prices hitting record highs above $2000.
Debt-laden Chinese real-estate developer Evergrande (HKG: 3333) yesterday told its bankers that it won't make interest payments due next week, and today said its founder's wife has made a US$3m investment into the group's wealth-management products "to try and calm shareholders".
"China is facing another winter of power shortages," says Bloomberg energy correspondent Javier Blas, "in part due to record high coal and extremely high LNG prices."
Europe's record-high gas and electricity prices have now forced a UK fertilizer manufacturer to suspend some production, it said Thursday.
Meantime in Germany, "Autonomy, electrification, sustainability take center stage," says chip-and-software maker Nvidia of this week's IAA Auto Show in Munich, where attendance by 400,000 people was down almost 1/4 from 2019's event.
"In many respects, this was Mercedes' show," says Wallpaper, "even though it was held in BMW's hometown," with full battery-electric or fuel-cell vehicles dominating new launches, alongside recycled and recyclable prototypes, while Korean auto-giant Hyundai (KRX: 0055380) announced a commitment to 'carbon neutrality' by 2045.
"Ferrari and Lamborghini, icons of horsepower and machismo, had no exhibits at the show," says the New York Times, "[but] an entire hall was devoted to bicycles and e-bikes."