END_OF_DOCUMENT_TOKEN_TO_BE_REPLACED

GOLD PRICES twice rose towards $1950 in overnight derivatives trading Wednesday, dropping back $25 per ounce by lunchtime in London – the precious metal's physical storage and trading hub – as world stock markets attempted to rally despite Russia again warning that nuclear conflict could result from Western intervention against its invasion of Ukraine.
With Russia claiming its forces have taken the Black Sea port of Kherson as paratroopers entered Kharkiv, the country's 2nd largest city, the United Nations today said that 4 million Ukrainians may seek refuge in other countries as a result of Russia's current action.
Some 2 million people are already displaced internally following Moscow's 2014 invasion of Crimea and support for 'separatists' in the Donbass, with 14,000 killed.
"A third world war would be nuclear and destructive," said Moscow's foreign minister Sergei Lavrov today in comments reported by Russian news agencies RIA and TASS.
While Western stock markets rose after yesterday's sell-off took the MSCI World Index down 10% from New Year's record high, a strong Dollar – now at fresh 2.5-year highs on its trade-weighted index – saw gold prices for Euro, Sterling and other investors rise more quickly and hold more of those gains, trading around €1740 and £1440 per ounce.
The European Union today locked 7 Russian banks out of the global Swift network of payments messaging while tightening other sanctions against President Putin, his cabinet and his 'oligarch' supporters.
"Gold will soar as China seeks US Dollar alternatives," claims a headline at AsiaTimes, pointing to the impact of Western sanctions on Moscow's central-bank reserves and quoting an interview with former IMF economist Ken Rogoff during which his only actual reference to gold was to say that Russia "was already trying to reduce their exposure [to the US currency] by kind of getting into gold in the years leading up to the pandemic." 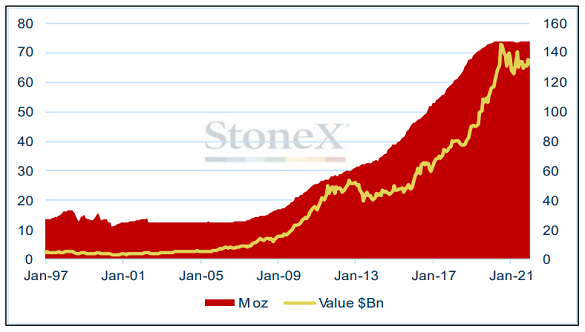 The Central Bank of Russia's return to buying gold – suspended during the oil-crash phase of the Covid Crisis 2 years ago – "looks like a two-fold risk hedge," says a note from precious-metals specialist Rhona O'Connell at brokerage StoneX.
"[First] help out the domestic banks that, if affected by SWIFT, would have issues selling into the international market [and second] bolster reserves given that the CBR's [overseas assets] have been frozen."
With Russia's gold holdings still around 20% of total FX reserves, "Gold is always a useful credibility factor for banks under stress," says O'Connell, "although this situation stands alone."
Lavrov – who has continued accusing Ukraine of "genocide" against Russian speakers and who last week attempted to "justify the unjustifiable" by pointing to a controversial Ukrainian language law adopted in January – yesterday told a meeting of the Human Rights Council that Western nations must not have military bases in any former Soviet states.
Speaking to the HRC in Geneva by videolink, Lavrov was immediately boycotted by most delegates walking out of the chamber as he spoke.
"Ukraine still has Soviet nuclear technologies and the means of delivery of such weapons," Lavrov went on, without giving evidence for any breach of the 1994 Budapest Memorandum which saw Russia, the US and UK guarantee Ukraine's independence after the dissolution of the USSR in return for giving up the 1,900 strategic nuclear warheads then stationed there.