END_OF_DOCUMENT_TOKEN_TO_BE_REPLACED

GOLD MARKET prices in London wholesale trading held tight around $1280 per ounce on Wednesday ahead of the US Federal Reserve's decision on Dollar interest rates, widely expected to deliver no change from the current 11-year high of 2.50%.
The gold markets in both Tokyo and Shanghai were shut overnight for national holidays.
Betting on US Fed Fund futures now sees 71% chance that the US central bank will cut its key interest rate at or before its first meeting in 2020. 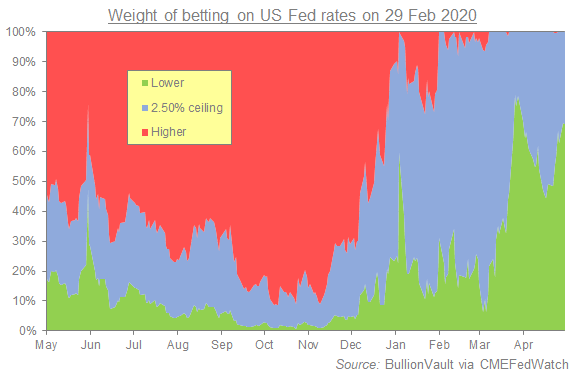 "Despite the market once again pricing in a rising probability of a Fed rate cut this year," say analysts at Asian-based London bullion market-maker Standard Chartered, "we continue to expect gold prices to consolidate lower," forecasting a Q2 average of $1285.
StanChart then sees gold bullion prices "recovering to average $1325 per ounce in the fourth quarter."
Falling to average $1286 in April, wholesale gold market prices averaged $1303 between January and March 2019, nearly matching the quarterly average in Q2 2018.
Wednesday meantime saw China, Hong Kong, Mexico, Brazil and Chile plus Germany, France, Italy and many other European stock exchanges shut for May Day.
India's NSE was also closed for the Mumbai region's Maharashtra Day, while Japan's equity markets remained shut for the accession of Emperor Naruhito and his new Reiwa imperial era.
Australian equities rose 0.8% for the day, approaching last week's new 12-year high, but major gold-mining stocks Evolution (ASX: EVN) and Northern Star (ASX: NST) both fell as Aussie Dollar bullion prices held 4.5% below January's new all-time high.
"Strong results from US companies have lifted the S&P500 index to a new all-time high," says a note from German-based refining group Heraeus, "and many [other] equity markets have had strong recoveries this year.
"As a result, gold has been getting less attention."
Internet searches from investors worldwide wanting to "buy gold" fell last month to their weakest volume since last summer's 11-year low.
Sales of gold American Eagle coins from the US Mint fell 26.1% in April from March, but the year-to-date total now stands 40.3% higher from the first 4 months of 2018 according to CoinNews.net

Gold-market prices in British Pounds per ounce today erased last week's 1.4% gain, trading back down to £980 as Sterling rose after weaker-than-expected consumer borrowing figures but a stronger reading on the Markit PMI index of UK manufacturing activity.
Ahead of Thursday's local UK elections – widely seen as a battleground for pro- and anti-Brexit politicians – the opposition Labour Party confirmed that its manifesto for this month's increasingly likely participation in European Union elections will not call for a second or 'confirmatory' referendum on Brexit.
Brent crude oil also fell back Wednesday, retreating to its lowest in 2 weeks beneath $72 per barrel, dropping over $3 from last week's 6-month highs.
US sanctions against countries buying oil from Iran – set to begin tomorrow – are forcing refiners in major Iranian oil importer India to seek new, lower-quality supply, and risk boosting both fuel prices and inflation said New Delhi's ambassador to Washington on Tuesday.
To beat the US sanctions against its nuclear research program, Tehran is looking to sidestep US Dollar trading for oil reports the Jerusalem Post, starting with the Instex payments channel launched by anti-sanction European nations Germany, France and the UK in January.
Back in London's wholesale gold bullion market, French investment bank Societe Generale (EPA: GLE) has meantime resigned as a market-maker Reuters reports, quoting trade body the LBMA.
That leaves 12 institutions promising to quote 2-way prices in bullion, unchanged in number from this time 5 years ago.
Extending the drop in wholesale gold today, silver prices fell to $14.81 per ounce, near April's drop to the lowest since Christmas.