END_OF_DOCUMENT_TOKEN_TO_BE_REPLACED

GOLD BULLION rose in terms of all major currencies bar the Yen on Tuesday, rising above $1800 per ounce in US Dollar terms after the Bank of Japan shocked global markets by loosening its 'yield curve control' over Tokyo's long-term bond prices, letting the cost of borrowing jump sharply to 7-year highs.
With consumer-price inflation in the world's 3rd largest national economy running at the fastest pace since 1991 at 3.7% per year, the BoJ today left its overnight interest rates at minus 0.1% per annum – now the only negative major-market rate worldwide.
But the Topix stock index dropped 1.5% and the Japanese Yen soared to 4-month highs against the Dollar as the BoJ also doubled the ceiling for 10-year Japanese government bond yields from 0.25% to 0.50%, enabling Tokyo's cost of borrowing to rise even as the Bank increased the sum of money it can spend defending that cap by almost 1/4 to ¥9 trillion per month ($67 billion).
Ten-year JGB yields jumped 0.15 percentage points on the changed YCC policy, reaching the highest since 2015 at 0.42% per annum.
Gold priced in the Yen sank to 12-week lows below ¥7,700 per gram – a fresh all-time high when first reached in February amid Russia's invasion of Ukraine but 6.0% below off April's current record peak. 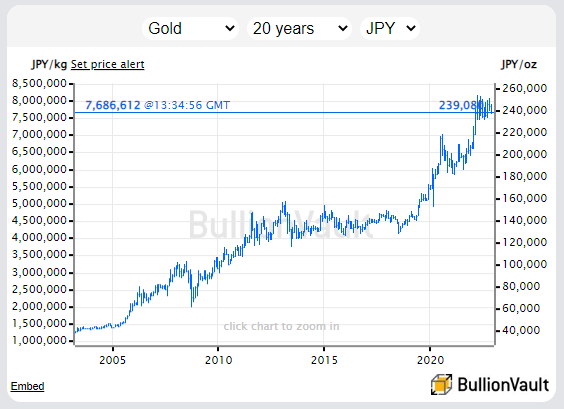 Other government bond prices fell on the BoJ move Tuesday, driving up borrowing costs for Euro, UK and the US governments.
The cost of energy also rose, with Brent crude rising back above $80 per barrel and European natural gas rallying from yesterday's drop near 6-month lows as the region's cold snap ended with a jump in temperatures.
"If even Japan is now on the road to raising interest rates or at least relaxing its iron grip on the government bond market, the last holdout from the 'secular stagnation' days is gone," says Bloomberg columnist John Stepek.
"Unlike other central banks, the [staff of Haruhiko Kuroda's Bank of Japan] seem to like to surprise the markets," says one money manager in Singapore.
"[Surprise] is a monetary policy tool, it's a very different philosophy. 'This is how we have an impact' as opposed to other central banks, which [aim] to telegraph" their plans well in advance.
Last week's half-point hike to overnight Dollar rates from the US Federal Reserve "was already baked into the markets," says bullion analyst Rhona O'Connell at brokerage StoneX, "but the dot plot [of voting member forecasts] was marginally more hawkish than expected.
"The markets are projecting [Fed rate] cuts starting in mid-year, much more benign than the Fed rhetoric," O'Connell says. In response, gold ETF investors "are still voting with their feet; there has been some light buying from time to time but in the month of December to date, the selling continues to outweigh the buying."
New York's giant GLD gold ETF expanded 0.2% on Monday but competitor fund the IAU was unchanged in size.
Tuesday morning's Bank of Japan news saw the Dollar Index – a measure of the US greenback's exchange-rate value against a basket of the world's other major currencies – drop back towards last week's 6-month low.
That helped gold bullion jump back above $1800 per ounce in Asian and London trade, peaking $15 below last week's 6-month high of $1824 before dropping back again to the $1800 level.
Gold bullion also jumped in British Pounds, setting new 5-week highs above £1485 per ounce, and regained the €1700 level for Euro investors.
Japan's central government spending will exceed its revenues by a record sum next year, the JiJi news agency quotes "sources" today, with the budget deficit reaching ¥114 trillion ($839bn) driven by military spending.
Japan is already set for a budget deficit equal to 7.2% of GDP this financial year, ratings agency Fitch said last month, calling that gap between spending and income – larger than Germany, Canada or France's but smaller than the UK (at 8.0%) or the United States' central government deficit (at 10.9%) – "consistent with debt stabilization."
Tokyo last week revised its National Security Strategy, adding the capacity to attack a foreign country "in case of emergency", a move condemned by China – already dubbed the "greatest strategic challenge ever" by Fumio Kishida's Government amid fears that its neighbor could try to seize the Nansei Islands' chain between southern Japan and Taiwan if Beijing invades the democratic Republic of China.
China's own budget deficit has also hit a fresh record this year, Bloomberg reports based on Finance Ministry data, with total government spending in the world's most populous nation exceeding revenues – boosted and hit respectively by stimulus and tax rebates aimed at easing the impact of 'zero Covid' restrictions – by ¥7.75 trillion ($1.1 trillion) between January and November.