END_OF_DOCUMENT_TOKEN_TO_BE_REPLACED

GOLD PRICES touched a price of $1800 per ounce for the first time in a month in London trade Thursday, extending this week's gain to 2.4% so far as longer-term and real interest rates fell around the world amid yet more confusing inflation data.
Silver prices tracked and extended the move in gold, adding 2.8% from last weekend at $23.30 per ounce, while crude oil rebounded and European energy costs jumped yet again.
Commodity costs for US manufacturers rose to the 8th consecutive monthly record in a row in September, the Bureau of Labor Statistics said today, up 20.4% from 12 months ago.
Excluding food and fuel however, the Producer Price Index rose 6.8% per year, missing analyst forecasts of 7.1% inflation.
Longer-term US bond yields fell again Thursday "as investors digested [that] lighter-than-expected September producer inflation reading," says CNBC.
But US government borrowing costs had begun falling on Tuesday morning, dropping from 4-month highs of 1.63% per annum on 10-year debt ahead of both yesterday's CPI print and today's producer-price data and reaching 1.53% as New York trade opened on Thursday.
Yields on inflation-adjusted TIPS have also retreated by 0.1 percentage points so far this week.
Those real rates have shown a consistently strong, negative relationship with gold prices over the last decade, falling as gold rises and vice versa.
But that relationship fell to its weakest in over 2 years this summer as gold prices struggled even while 10-year TIPS yields set fresh record lows of minus 1.20%. 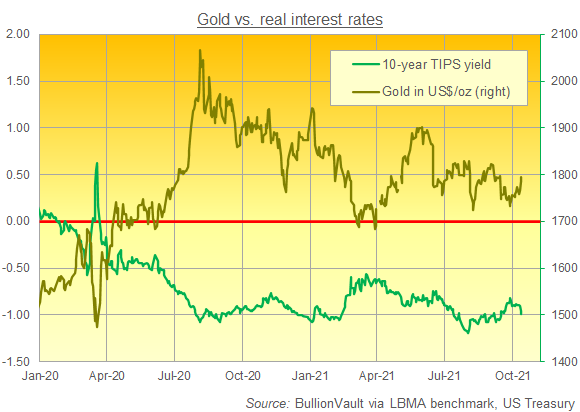 After yesterday's US consumer-price inflation for September came in just ahead of analyst forecasts with a fresh 3-decade high of 5.4%, new data today put China's consumer-price inflation at its weakest since March, slowing to just 0.7% per year and missing consensus forecasts of a rise to 0.9%.
But inflation in the world No.2 economy's producer prices, in contrast, accelerated to a new quarter-century high at 10.7% per year, taking input costs for China's huge manufacturing sector back towards the all-time peaks of 2011 and 2018, led by coal and other energy inputs.
Australian inflation expectations today showed a sharp decline from last month's 4.4% to 3.6% per year forecast among consumers.
"[Yesterday's] strong v-shaped reversal across gold and silver [following an initial sell-off following the US CPI figures] does mark a shift in confidence about whether the Fed can keep head of the inflation curve," says a trading note from Swiss refiners and finance group MKS Pamp, noting the steep drop in real US bond yields.
The gap between TIPS yields and conventional Treasury bond rates held Thursday at 2.52% per annum on 10-year notes, implying the strongest market-based outlook for inflation since June's multi-year peak.
But despite bond-market breakeven rates rising, and with out-turn US inflation reaching new 30-year highs on September's data, betting on interest-rate futures now sees a smaller chance of January marking "lift off" for the Fed than it did this spring, down from 18.0% to just 3.0% according to the CME's FedWatch tool.
Betting on June 2022 seeing the first rate rise has leapt in contrast, reaching new series highs of 29.9% yesterday before easing back, with Sept 2022 finding the odds of Fed rates still remaining at today's zero level down near yesterday's series low of 34.0%.
Minutes from the US Fed's September policy meeting released Wednesday pointed to a likely start of QE tapering in November, although the notes used that word only 8 times against July's 16.
Here in the UK meantime, day-ahead wholesale electricity prices today jumped 65% from Wednesday's 2-month low, making this week's average baseload costs the most expensive since mid-September's record highs.
For UK electricity suppliers, light winds plus capacity cuts to imports from Ireland and surging natural gas prices – up another 5% on Thursday after tripling inside 3 months – "are making coal more profitable", reports Bloomberg, with the National Grid asking Uniper (ETR: UN01) to fire up its 54-year old Ratcliffe coal-powered plant on Monday.
"Accelerating the transition from coal to clean power" is the key energy aim of next month's UN Climate Change conference, hosted by the UK government in Glasgow, according to the COP26 website.
Gold priced in the British Pound today steadied above £1310 per ounce after hitting 5-week peaks £5 higher on Wednesday.
Euro gold meantime challenged mid-July's high at €1551, up 2.2% for the week so far.