END_OF_DOCUMENT_TOKEN_TO_BE_REPLACED

GOLD PRICES rose sharply ahead of new US inflation data Wednesday morning in London, nearing last Friday's spike to 2-week highs in Dollar terms at $1780 and 5-week highs close to €1540 per ounce in Euros, before giving it all back and then rallying again after the Bureau of Labor Statistics said consumer-price inflation hit a fresh 3-decade high last month of 5.4% per year.
With gold prices peaking and then dropping 1.1% to $1758 and €1524 per ounce, UK investors saw bullion pierce £1300 for the 3rd time in 2 weeks before also dropping back, falling to £1294 despite official data saying the UK's economic rebound slowed to 2.9% across June-to-August from 3.6% across the previous 3 months.
That 3-month growth rate then fell to 1.5% in September according to the independent NIESR.
Friday's $25 gold-price spike came and went on the release of weaker-than-expected US payrolls data for September which still saw the jobless rate continue its post-pandemic drop.
Today's $15 rise, fall and rebound to $1770 came as the BLS estimated that the cost of living rose 0.4% in September from August – ahead of the 0.3% expected by most analysts – with food bills rising 0.9% and energy costs up 1.3% to the highest in 7 years.
WTI crude oil today fell back from 7-year highs above $80 per barrel while European Brent also retreated from its 3-year highs. 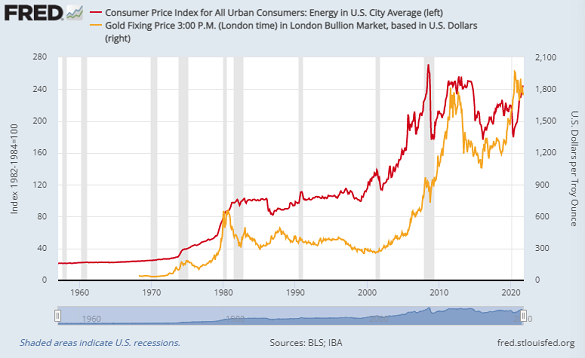 So-called "core" inflation meantime held at 4.0% per year in September, today's new data said, in line with analyst predictions when "volatile" food and fuel costs are stripped out.
For the month, that saw average weekly earnings outpace inflation on both measures the BLS said in a separate release, rising 0.8% faster than headline CPI living costs from August but declining by more than 0.7% in real terms from this time last year.
"The word 'transitory' has become a swear word to my staff and me," said Atlanta Federal Reserve president Raphael Bostic in a speech about US inflation yesterday.
"I think 'episodic' better describes these pandemic-induced price swings," said Bostic – a voting member of the Fed's policymaking team, "[and] I believe evidence is mounting that price pressures have broadened beyond the handful of items most directly connected to supply chain issues or the reopening of the services sector.
"[These] conditions argue for a removal of the Committee's emergency monetary policy stance, starting with the reduction of monthly asset purchases."
"I myself believe," added Fed vice-chair Richard Clarida in another speech, "that the 'substantial further progress' standard has more than been met with regard to our price-stability mandate and has all but been met with regard to our employment mandate.
"So long as the recovery remains on track, a gradual tapering of our asset purchases that concludes around the middle of next year may soon be warranted."
Shorter-term interest rates in the US bond market today extended their rise, with 2-year Treasury yields reaching new 20-month highs above 0.36%, but 10-year yields slipped again from last week's 4-month highs above 1.60%.
Ahead of today's US inflation data, the giant gold-backed SPDR GLD trust fund held unchanged in size on Tuesday, but the smaller IAU gold ETF shrank 0.2% to join the GLD in being its smallest since April 2020.
Silver on Wednesday tracked gold prices but fell less steeply after the US data release, dropping 0.6% from Wednesday's 4-session peak at $22.94 per ounce.
Platinum prices were little changed meantime, holding tight around $1011, as Asian stock markets closed lower once more but European equities were mixed and US futures pointed higher – set to reverse Tuesday's small drop – ahead of a raft of bank earnings reports.
Japanese data today said machinery orders shrank unexpectedly in August, down 2.4% from July, while industrial output across the 19-nation Eurozone beat analysts forecasts with 5.1% annual growth.
China's official trade data today said total imports slowed to 10.1% annual growth in September from 23.1% the month before, but exports accelerated from 15.7% to almost 20% year-on-year growth.