END_OF_DOCUMENT_TOKEN_TO_BE_REPLACED

GOLD PRICES held flat around $1891 per ounce in London trade Wednesday, drifting ahead of tomorrow's US inflation data as Western stock markets slipped and longer-term borrowing costs retreated following mixed inflation figures from China.
Factory-gate prices in the world's 2nd largest economy jumped 9% last month from May last year, depths of the first wave of Covid pandemic and lockdowns, while machine-tool orders in neighboring Japan showed a 141% year-on-year jump.
But the Consumer Price Index in China slipped 0.2% from April, capping annual inflation at 1.3%, while money-supply growth in Japan slowed hard from 9.2% per year to 7.9% last month.
"The best forecasters are definitively on Yellen's side," says an opinion piece at Bloomberg, pointing to last weekend's comment from US Treasury Secretary Janet Yellen that – like Federal Reserve chairman Jerome Powell – she believes the recent spike in annual inflation data is "transitory", led in most part by the base effect of last spring's Covid Crash in commodity prices.
Breakeven inflation rates in the US bond market last night closed at a new 6-week low, with the gap between inflation-protected and conventional 10-year US Treasury yields falling to 2.36% per annum.
That was the highest such forecast since spring 2013 when first reached at end-March. 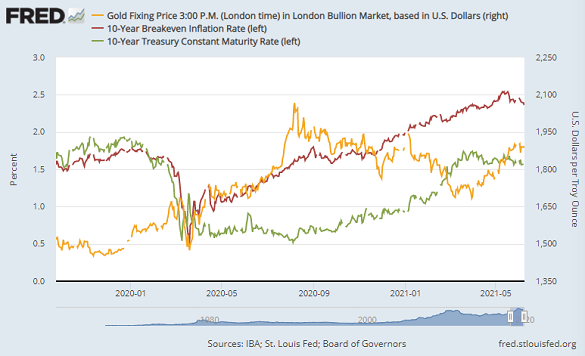 "Gold is really not a perfect inflation hedge," says Amy Arnott, a portfolio strategist at data and ratings provider Morningstar, missing the importance of interest rates on gold prices.
"There's no guarantee if there's a spike in inflation, gold will also generate above-average returns."
Over the last 50 years however, " only 16% of the variation in gold prices can be explained by changes in CPI inflation," says analysis from the mining industry's World Gold Council.
"[So] in reality," says Gavin Haynes at West England investment consultants Fairview Investing, "if real interest rates remain negative, then gold has some appeal. However, if inflation leads to rising rates, the opportunity cost of holding gold rises because it doesn't have an income."
"Real rates are, and will remain for a long time yet, negative," says today's precious-metals note from brokerage StoneX.
"The Fed is talking about talking about tapering, but that's not going to happen until there is 'substantial further progress' on inflation and employment. Unemployment [is] at 5.8%, still way off the 3% target."
Shanghai gold prices held flat overnight as global quotes slipped from yesterday's attempt on $1900 gold, showing the smallest discount to London quotes for 6 sessions at $17 per ounce after erasing 2021's earlier run of positive incentive for new imports to China.
With global gold prices continuing to hold below $1900 as copper retreated but crude oil prices rose, Japan's 10-year borrowing costs today slipped to 0.06% per annum, while commodity giant Australia's fell 4 basis points to 1.48%, the lowest since February.
Germany's 10-year Bund yield meantime fell to the lowest in a month at minus 0.25% per annum, and UK government borrowing costs tested their lowest since mid-April at 0.75%.