END_OF_DOCUMENT_TOKEN_TO_BE_REPLACED

GOLD PRICES sank and then rallied straight back up on Wednesday in London, reversing an earlier $15 drop back towards yesterday's new 13-week lows against the strong Dollar after new US data said consumer-price inflation in the world's largest economy slipped back from 4-decade highs in April but beat analyst forecasts.
With gold priced in the Dollar back up at $1850 per ounce, Western stock markets also rebounded following the US inflation data – although the tech-heavy Nasdaq could only hold flat – after erasing on Tuesday a strong bounce from Monday's fresh multi-month lows.
So-called cryptocurrency Bitcoin meantime fell back below $30,000 to trade at barely half its US Dollar value of this time last year, while so-called "stablecoin" UST traded at just 50 cents – "a significant deviation from its intended peg at $1" as creator Do Kwon put it to his half-million followers on Twitter.
Sister token Luna, also issued by Terra, sank by more than 90% despite Do Kwon vowing yesterday that he is "close to announcing a recovery plan" for his schemes.
With the US Dollar surging in April to its strongest FX value in 2 decades against the rest of the world's major currencies, headline consumer prices rose just 0.3% last month from March, the Bureau of Labor Statistics said, the slowest pace since New Year 2021.
Core inflation excluding fuel and food in contrast rose 0.6%, its fastest pace since January. 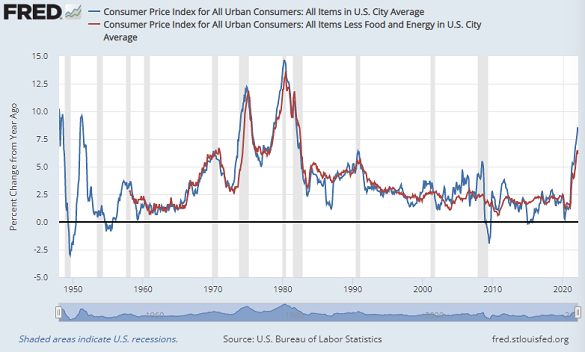 Year-on-year that put headline inflation at 8.3%, down from March's 8.6% pace, while core inflation slowed from 6.4% – also the highest since the deep recession of 1982 – to 6.2%.
That still meant that both readings beat consensus forecasts.
"There's not much to reassure the Fed in this release," says Brian Coulton, chief economist at ratings agency Fitch.
"With the summer driving season approaching, the national average [US] price for regular gasoline soared on Tuesday to a nominal record of $4.37 per gallon," says the New York Times.
That's equivalent to consumers paying $185 per barrel – a sign of tight capacity and high profit margins in the refining industry against crude oil rising back to $105 on Wednesday.
Longer-term interest rates also rose again following the CPI print, taking 1-year US Treasury yields back above 3.0% per annum – their highest since late 2018 – while German Bund and UK Gilt yields both added 5 basis points to 1.05% and 1.89% respectively.
Inflation in Germany, the Eurozone's largest national economy, was confirmed for April today at a 4-decade high of 7.8% on the harmonized measure by Destatis.
UK inflation will reach 10% by late-2022 said the Bank of England last week as it raised its overnight interest rate to match the US Fed's May rise to 1%.
"As looming rate hikes are forecast to drive up real yields," says the latest weekly analysis from specialist consultancy Metals Focus, "this will continue to raise the opportunity cost for holding non-yielding assets such as gold."
Tuesday's fall in gold prices saw US-listed gold ETF investment products shrink in size, with shareholders of the giant GLD product liquidating 0.7% with its 4th consecutive outflow, while the smaller IAU product shrank by 0.2%.
"[But] several factors justify holding gold," Metals Focus says, "among them the growing risk that the slowdown in GDP growth may become more dramatic than expected, led by deepening supply-chain challenges, the Russia/Ukraine war and lockdowns in China.
"These factors should encourage institutional investors to retain their existing gold positions as a hedge against uncertainties [and] in turn may prevent a heavy sell-off in the gold market."