END_OF_DOCUMENT_TOKEN_TO_BE_REPLACED

GOLD PRICES rallied in London trade Tuesday lunchtime, erasing an earlier $20 drop from last weekend's level as geopolitical tensions over the Russia-Ukraine border and naval maneuvers in the South China Sea worsened, and new US data put consumer-price inflation in the world's largest economy ahead of analysts' already aggressive forecasts.
"Russia must end this military buildup" along its border with Ukraine, said Nato's Secretary-General at a joint press conference with Kiev's most senior diplomat today.
The Philippines meantime protested to Beijing over a flotilla of Chinese boats anchored at the Whitsun Reef, and it also began 2 weeks of annual military drills with US vessels.
With the headline US inflation rate leaping from 1.7% to 2.6% per year on March's data, the Consumer Price Index showed the fastest 1-month rise in US living costs since June 2009.
Excluding volatile fuel and food prices however, the 'core' CPI index rose less steeply, up 0.3% for the month and up 1.6% from a year ago – an annual pace of inflation matched or beaten 5 times in the second half of 2020.
That was still ahead of consensus forecasts for March at 1.5% per year. 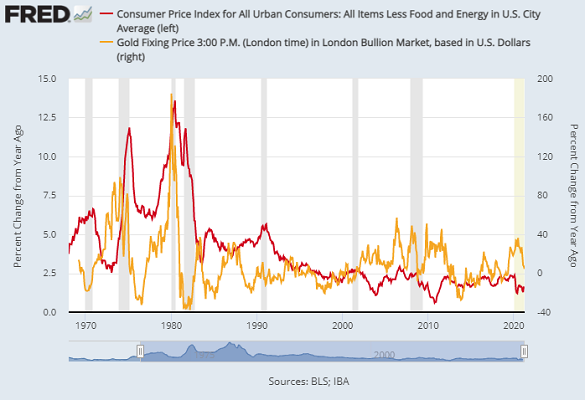 "Gold prices tend to rally strongly amid periods of high and unexpected inflation," reckons New York-based precious metals analyst Suki Cooper at Asian-focused bank and London bullion market maker Standard Chartered.
"[So] gold prices are not fully reflecting risks of high inflation in the near term as economies reopen."
"Gold only really gets going," agrees Rhona O'Connell at brokers StoneX, "when inflation becomes a threat, [but] not when, as now, it is an important supportive element of economic activity.
Further ahead, "There's much more to gold than just inflation," O'Connell says, "and I'm more concerned about financial fragility and the impact of excess liquidity once the global economy starts to look stronger."
Silver joined gold prices in erasing the week's earlier losses, trading above $25.30 per ounce – a 7-year high when first reached last August.
With global stock markets struggling for a second day running after closing last week at new all-time highs on the MSCI World Index, gold prices meantime rallied back to $1742 per ounce.
Government bond prices also edged higher, capping longer-term interest rates despite the jump in US inflation, after world No.2 economy China reported stronger but weaker-than-forecast annual growth in its exports.
Surging by nearly one-third year-on-year in March, China's exports were outpaced by 38% growth in its imports, cutting its monthly trade surplus with the rest of the world below $14 billion, barely one-quarter the size analysts expected.
Ten-year US Treasury yields retreated to 1.66% after the US inflation news, down from 1-week highs of 1.70% hit in early Asian trade, when gold prices had touched 1-week lows beneath $1724 per ounce.
Back in Moscow, "We are invincible from the hot war point of view," said the head of Russia's state-funded TV and web channel RT in a 3-hour special about Ukraine on state broadcaster Rossiya 1 last night, while another commentator said British intelligence is pushing Kiev into outright conflict with its neighbor.
Moscow today warned the US to keep 2 warships about the enter the Black Sea away from the Ukraine territory of Crimea – which Russia annexed in 2014 with a death-toll of some 13,000 – calling their deployment "a provocation".
The foreign ministry in Manila meantime summoned Beijing's ambassador to protest over the "illegal lingering" of more than 200 militarized Chinese boats near the Spratly Islands.
The US-Philippines exercises show "a combat-credible force, capable of responding to any contingency" according to a senior US commander.
China has sent an aircraft carrier into the region "to keep US military activities in check" according to a military commentator quoted in the state-run Global Times.
Monday saw no change in the size of either the giant GLD gold-backed trust fund nor its smaller gold ETF competitor the IAU.
That kept the GLD at its smallest in 12 months needing 1026 tonnes of gold backing, while the IAU hasn't been smaller since last August at below 502 tonnes.
US crude oil prices today edged higher but continued to hold below $60 per barrel, a 13-month high when reached in mid-February.