END_OF_DOCUMENT_TOKEN_TO_BE_REPLACED

GOLD PRICES continued to rise in London trade Wednesday, reaching 2-week highs against a weaker US Dollar as longer-term interest rates eased back from their strongest since mid-2019 ahead of tomorrow's US consumer-price inflation data.
With gold prices reaching $1830 per ounce, Washington's 10-year Treasury yield slipped 3 basis points from Tuesday's new 30-month highs at 1.96% per annum.
December's CPI inflation was reported at 7.0% by the Bureau of Labor Statistics, the fastest annual rise in the cost-of-living for 4 decades, creating the worst negative real interest rates on record for cash savers.
Consensus forecasts now expect inflation to read 7.3% for January 2022.
"We could have [inflation] worse before it gets better," said San Francisco Fed president Mary Daly to CNN on Tuesday.
"But it is definitely going to get better." 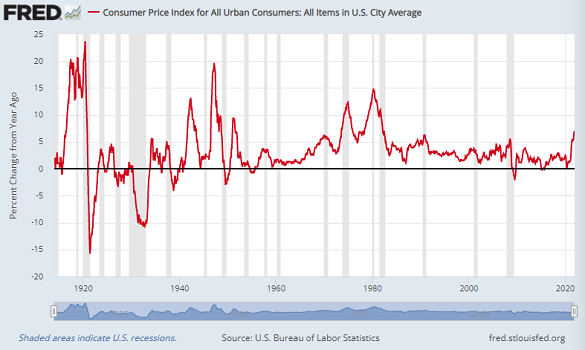 Excluding 'volatile' fuel and food prices, so-called 'core' inflation will meantime accelerate from 5.5% to 5.9% for New Year 2022, analysts predict.
That would take underlying growth in underlying US consumer prices to the highest since the late 1990s on a 5-year basis.
"I am very hopeful we are going to start to see [inflation] decline," said Atlanta Fed president Raphael Bostic – like Daly, not a voting Fed member until 2023 – to CNBC today.
"There is some evidence we are on the cusp of that [and] in terms of hikes for the interest rates, right now I have three forecast for this year.
"I'm leaning a little towards four, but were going to have to see how the economy responds as we take our first steps" up from the zero interest rate set by the Fed since the Covid Crisis began in March 2020.
Over in the interest-rate derivatives market, 1-in-4 bets on March's policy meeting now sees the Fed hiking by half-a-point to 0.75% next month, rather than the more usual quarter-point move.
For December, says the CME exchange's FedWatch tool, over 4-in-5 bets now see 5 or more such 'baby steps' by the end of 2022, up from 1-in-4 this time last month.
The Dollar still retreated towards 3-week lows Wednesday on its trade-weighted index against the rest of the world's major currencies.
With gold rising to $1830, that saw the price of bullion for Euro investors briefly regain the €1600 level for the first time in a week as France's President Emmanuel Macron was accused of "freelancing" and weakening Nato's unity in his weekend talks with Russia's President Vladimir Putin over trying to de-escalate tensions over Moscow's massive troop deployment along the border with Ukraine.
The gold price in British Pounds per ounce meantime touched £1350 for the first time since mid-January as UK Prime Minister Boris Johnson faced further calls to resign over Partygate and also for trying to smear opposition leader Keir Starmer, while a Parliamentary committee reported that Brexit – which Johnson championed in the 2016 referendum and again in winning the 2019 general election – has so far resulted in a "clear increase in costs, paperwork and border delays" for UK business and trade.