END_OF_DOCUMENT_TOKEN_TO_BE_REPLACED

GOLD PRICES rose to 4-session highs against the Dollar and touched 1-week highs for Euro and UK investors on Wednesday before dropping back after new US jobs data said the world's largest economy continues to expand ahead of today's November interest-rate decision from the Federal Reserve.
Gold priced in the Dollar dropped $10 of its earlier rise to trade back below $1650 per ounce, while the gold price in Sterling and Euros edged lower from £1441 and €1676 respectively.
After September's US job openings data came in yesterday much stronger than forecast following the slump in August, today's private-sector ADP Payrolls estimate of October's jobs market said the world's largest economy added 239,000 workers last month, more than 22% above consensus expectations.
With the Fed continuing to face the worst consumer-price inflation in 4 decades, and the official BLS jobs estimate due Friday, "This is a really strong number given the maturity of the economic recovery," says Nela Richardson, chief economist at ADP.
"While we're seeing early signs of Fed-driven demand destruction [after 3 rate hikes of 75 basis points already], it's affecting only certain sectors of the labor market."
While 9-in-10 positions in interest-rate futures now see the Fed hiking by another 75 basis points today, betting on next month's decision is split between expecting another 75bps or just 50bps.
That would still put the cash return on Dollars more than 2 whole percentage points above where Euro rates are likely to end this year, and almost 1 point above China's benchmark loan prime rate.
Betting on December 2023's Fed decision now remains weighted towards rates ending next year at 4.75% or below, but that proportion has fallen from 97.6% of market positions a month ago to 55.0% after today's ADP jobs figure.
"Should the Fed pivot narrative be vindicated this week, then spot gold would have a high chance of touching $1700 over the immediate term," reckons one analyst quoted by Reuters.
"Any sort of story for Dollar weakness over [a] 50-basis-point hint from the Fed," adds another, "it shouldn’t be too hard for gold to get back up to $1670 or $1680 even over the coming sessions." 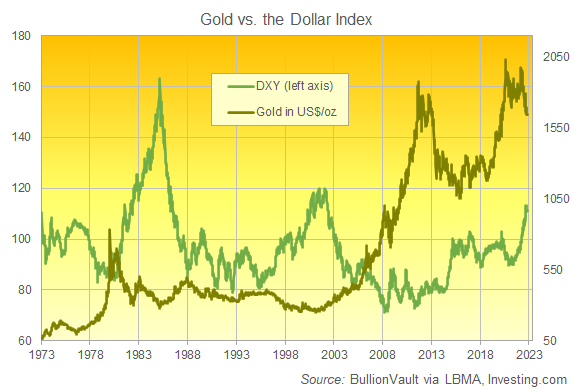 The Dollar slipped 0.2% on its trade-weighted index Wednesday morning before bouncing back after the DP jobs news and remaining stronger by 1/5th from this time last year at what was a new 2-decade high when reached in mid-September.
On a rolling 52-week basis, gold now shows a correlation of -0.70 with the Dollar's trade-weighted currency value, its most negative relationship since early 2021 and marginally more negative than their typical correlation of -0.63 shown since the era of free-floating currencies began in 1973.
Global stock markets fell back ahead of the Fed, dropping another 0.4% after reaching 6-week highs on the MSCI World Index last Friday.
Major government bond prices also slipped, edging longer-term borrowing costs higher once more, as crude oil dropped together with industrial metal copper.
Silver prices meantime flat-lined ahead of the US Fed's interest-rate decision, holding 25 cents below yesterday's 3-week Dollar high of $20.13 per ounce.