END_OF_DOCUMENT_TOKEN_TO_BE_REPLACED

GOLD PRICES continued to struggle near 1-month lows on Wednesday, holding below $1860 per ounce as the Dollar held near 1-month highs on the FX market ahead of today's interest-rate and QE policy decision from the Federal Reserve.
Global stock markets also slipped after last night saw the MSCI World Index fail to set a fresh record high for only the 3rd time in 11 sessions.
New data Wednesday said UK and Canadian inflation rates both beat analyst forecasts for May, as did Germany's CPI on Tuesday.
But France and Italy's cost of living came in below expectations despite the 'base effect' of last spring's crash in commodity and especially energy costs.
Gold priced in Euros today held near 1-month lows at €1533, a record high when first reached as the Covid Crisis approached in February 2020.
With no action expected from the Fed besides comments on " talking about talking about the start of tapering" the central bank's $120bn per month of QE bond buying, benchmark 10-year US yields slipped this morning to 1.49% per annum, while inflation-protected TIPS showed real interest rates of minus 0.91%.
That implies "breakeven" inflation will average 2.40% over the next 10 years, the highest such forecast from the bond market in almost 2 weeks but still well below mid-May's peak of 2.54%, the highest since spring 2013.
Last month saw the fastest US consumer-price inflation since 1992, up at 3.8% per year on the 'core' CPI index. 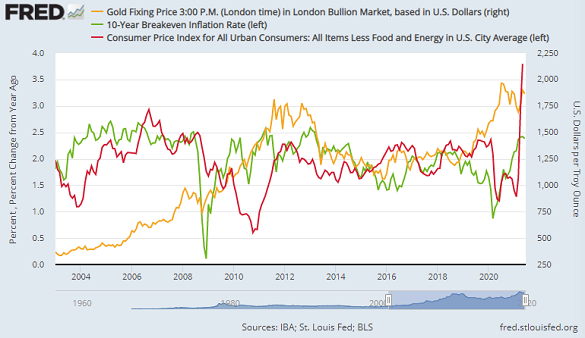 "Buoyant stocks brace for Fed to signal start of taper talk," says a headline at Reuters.
"US stock futures waver, bonds steady on FOMC Day," says Bloomberg.
But for gold-market traders, "Expectations are set that the Fed will reaffirm the pace of bond purchases," says the dealing desk at Swiss refiners and finance group MKS Pamp, "with markets pricing in that they deliver projections for the first rate hike in 2023.
"Short-term rhetoric around tapering is unlikely to really materialize before Jackson Hole in August" – the US Fed's annual conference for central bankers, held in Wyoming.
Meeting in Geneva meantime, "It's always better to meet face to face," said US President Joe Biden as he shook hands with Russian counterpart Vladimir Putin – a man Biden has said he believes to be a "killer" – ahead of the 2 nuclear superpowers' first summit since the Democrat took the White House from Donald Trump last November.
Putin said he hoped the meeting – set to cover differences over Syria, Ukraine and cyber hacking – "will be productive."
"Remarks to the effect that [America should] apply restraint, pressure on Moscow does not make the overall atmosphere any easier," said a Kremlin spokesman.
"China, Russia have 'no choice' but to strengthen strategic and military ties in face of G7 and Nato," says an opinion article in today's South China Morning Post after last week's Group of 7 meeting between the US and Canada, France, Germany, Italy, Japan and the UK was followed by the Western nations' North Atlantic military alliance calling Beijing "a security challenge".
The price of crude oil and natural gas – Russia's major exports and source of revenue – diverged in Wednesday's trade, edging up to new 2-year highs and retreating from yesterday's new 2.5-year peak respectively.
Higher energy costs helped drive UK consumer prices up 2.1% last month from May 2021, the first headline breach of the Bank of England's 2.0% target since July 2019.
The UK gold price in Pounds per ounce today failed to hold an overnight rebound towards last weekend's level, trading 1.0% lower from Friday's finish at £1317.
Canada's CPI index meantime showed its strongest year-on-year rise since 2011 at 3.6%.
"[But] remove gasoline [and] you're only back to where you where pre-pandemic," says one Canadian bank analyst.