END_OF_DOCUMENT_TOKEN_TO_BE_REPLACED

GOLD PRICES held firm as global stock markets slipped on Tuesday morning, rallying $15 per ounce from yesterday's 1-week low as major government bonds also gained, edging longer-term interest rates down ahead of tomorrow's monetary policy statement from the US Federal Reserve.
The Dollar steadied above the weekend's 10-week low but commodity prices also rose, while silver touched $26.30 per ounce.
With the US central bank expected to make no change to policy and then release new economic forecasts after concluding its 2-day meeting on Wednesday, "The gold market just wants to get past [the Fed announcement] to see what they have to say about inflation," Reuters quotes a strategist at derivatives brokerage RJO Futures in Chicago.
But the latest US GDP data aren't due out until Thursday, and "The Fed is looking for a body of hard evidence [for the] recovery," says specialist precious-metals analyst Rhona O'Connell at brokerage StoneX, "rather than just bullish forecasts.
"Jay Powell has also said that he will give the markets plenty of notice before implementing any tapering" – a move to reduce the monthly volume of new money creation and bond buying begun last week by neighboring Canada, pointing to signs of "extrapolative expectations and speculative behavior" especially in the housing market. 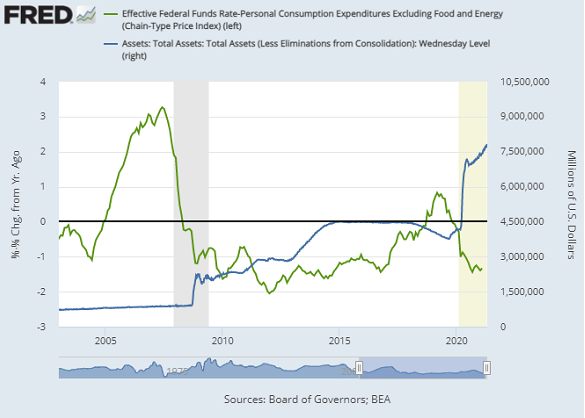 "The market's running hot," Bloomberg meantime quotes a credit trading boss of the surge in demand in fund manager demand for so-called 'junk bonds' offering higher yield in return for higher risk, "and that’s forcing investors to look more broadly at opportunities because of how tight things have been squeezed.
"The traditional high-yield investor that's wanted to get paid 5-7% yield is looking at higher-yielding parts of credit markets."
One UK fund manager has gone from 60% in BB-rated corporate debt to just 24%, moving the difference into lower-rated, higher-risk bonds.
Back in bullion, the giant GLD gold-backed ETF did not change in size for the 5th session running on Monday, but silver's largest ETF the SLV liquidated a further 0.2%.
Premiums in Shanghai versus London quotes today crept up towards $9 per ounce, a solid incentive for new imports of bullion to gold's No.1 consumer market, China.
Dealers in No.2 India however faced a collapse in demand as the country struggled to cope with record daily infections and deaths from Covid-19.
"A quiet start to the week across the precious complex," says a trading note from refining and finance group MKS Pamp, "[as Monday's] dip was short lived and the yellow metal rallied to $1781.
"The metals [then] held narrow ranges during Asian trade," but industrial precious-metal palladium leapt to set a new all-time high near $2960 per ounce.
Sister-metal platinum also gained, recovering most of a $20 dip overnight to rise near the last 2 trading days' 8-week highs.