END_OF_DOCUMENT_TOKEN_TO_BE_REPLACED

GOLD PRICES slipped for US and UK investors Thursday but rose in Euro terms after the European Central Bank hiked its key interest rate once again as expected to try fighting double-digit inflation, with Western stock markets falling but bond prices edging higher, easing the longer-term cost of borrowing.
Having touched a 2-week high of $1670 on Wednesday, the Dollar gold price today pulled back by $9 per ounce, erasing 1/3rd of its prior 1.6% gain for the week.
Oil rose for a 3rd session running, reaching 2-week highs above $97 per barrel of Brent, after the US Energy Information Administration said that the world's largest economy last week shipped record exports of crude and refined petroleum, spurring calls for government restrictions to try capping domestic prices as Russia's war in Ukraine and the Opec+ cartel's output cuts continue to hamper global supplies.
Natural gas prices also rose, up 4.1% from yesterday's 4-month low for European December contracts – reached after the region's No.1 economy Germany said its emergency gas-buying program means its  storage tanks are now more than 97% full while consumption is running "considerably lower" than usual for this time of year thanks to above-average October temperatures – following yesterday's progress towards joint purchases and a price-cap among the 27 member nations of the European Union.
"Inflation remains far too high and will stay above the target for an extended period," said the European Central Bank today after hiking its key interest rates by 0.75 percentage points for the 3rd meeting in a row, taking deposit rates to 1.75%.
Inflation across the 19-nation Eurozone last month ran at 9.9% per year.
"The Governing Council has made substantial progress in withdrawing monetary policy accommodation," today's ECB statement goes on, "and [it] expects to raise interest rates further to ensure the timely return of inflation to its 2% medium-term inflation target."
Now lagging US Fed interest rates by 1.5 percentage points, the ECB's widely-expected move saw the Euro currency fall on the FX market, dropping back below parity with the Dollar after breaching it yesterday for the 1st time since mid-September.
That helped gold priced in the single currency to rally a little from Thursday morning's new 3-month low of €1650 per ounce, just €5 above July's 5-month trough. 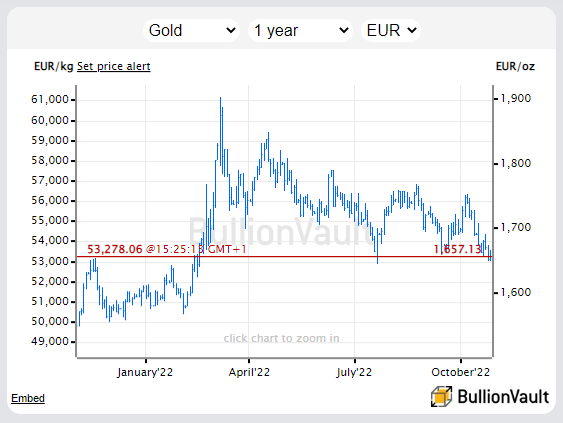 Betting on Federal Reserve policy now sees a stronger-than 9-in-10 chance that the US central bank will raise by 0.75 points again next Wednesday, but with a 2-in-3 chance that December will bring only a half-point rise.
The UK gold price in Pounds per ounce meantime held close to last night's new 3-month low of £1430 – down £150 from the 'mini-budget' peak of this time last month, when a disastrous set of policies from the short-lived Government of Liz Truss crashed the FX value of Sterling and the price of UK government bonds.
With Truss's replacement as Prime Minister – former Chancellor, Rishi Sunak – now facing questions over his decision to re-appoint Suella Braverman as Home Secretary despite her having to resign only last week over leaking highly sensitive security documents, the Pound today rose to a 6-week high of $1.16 on the FX market, while the cost of borrowing on 30-year Gilts fell back to mid-September levels of 3.62% per annum.
"Naturally, the [forthcoming EU gas-price restrictions] don't apply to the US," says Igor Sechin – CEO of Russian state oil giant Rosneft and personally targeted by Western sanctions over Moscow's assault on Ukraine – claiming that "a number of European experts and politicians openly accuse the United States of profiting from the energy crisis they have provoked.
"The idea is to essentially abolish the sovereign rights of countries to their own resources."
"I wouldn't say geopolitics is the main driver of gold right now," said James Steel, chief precious metals analyst at bullion-market clearing bank HSBC on a webinar for the London Bullion Market Association today, "but it has definitely moved up the table of important factors."
Silver meantime tracked the gold price for the week so far, showing a small gain Thursday afternoon in London at $19.50 per ounce.