END_OF_DOCUMENT_TOKEN_TO_BE_REPLACED

GOLD PRICES jumped to new all-time highs against a tumbling Euro on Friday, rising in all other currencies as well as global stock markets sank and investors fled into Western government bonds on news of Russian troops attacking Europe's largest nuclear power plant in their invasion of Ukraine.
With 6 nuclear reactors and 6 cooling pools, Zaporizhzhia in south-eastern Ukraine generates 1/5th of the country's electricity. The fire, now out, spread across 3 floors of a training building.
"Right now, Russian tanks are firing at the nuclear units," said Ukraine's President Volodymyr Zelensky in a video on social media early Friday. "They know where they are shooting.
"This marks terror of an unprecedented level".
Equities in neighboring Hungary's BUX index extended their drop from November's all-time high to worse than 25%, while Poland's WIG index traded over 14% down for 2022-to-date and the Czech Republic's PX index has now lost over 11% from the 13-year highs hit only 2 weeks ago.
News of the fire also saw Germany's Dax and London's FTSE100 indices both lose 3.1% as the Western European EuroStoxx 600 sank by 2.6%, but with Asian stock markets all closing sharply lower overnight, Pakistan's KSE100 index held flat despite  a suicide bomber killing 56 and injuring 190 during Friday prayers at a Shia mosque in Peshawar
Poland's Zloty and the Czech Koruna both rallied from this week's plunge as their central banks intervened in the market to support their currencies.
But gold priced in the Euro meantime touched €1785 per ounce – more than €15 above last week's fresh record – as the single currency extended its worst week in 7 years against the Dollar on the forex market, falling below $1.10 for the first time since May 2020, height of the initial Covid Crisis. 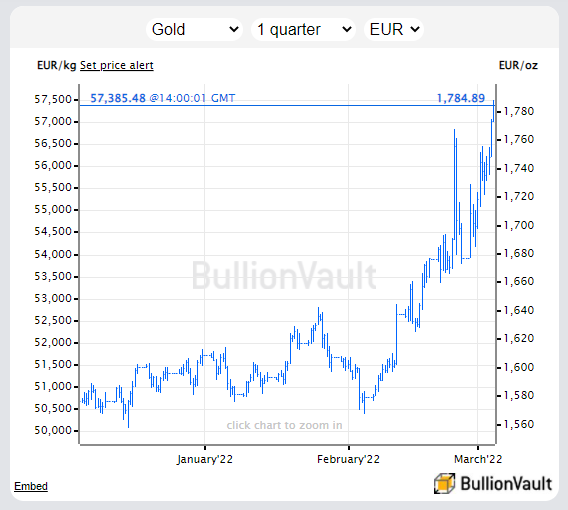 Trading at $1945 on Friday, the Dollar gold price remains 6.1% below its record peak of 6 August 2020.
The UK gold price in Pounds per ounce remains 7.2% below its all-time high, also set that day, at £1470.
The Russian invasion already puts the International Atomic Energy Agency in an "unprecedented" situation, "completely uncharted waters", says Rafael Mariano Grossi, director-general of the IAEA – a United Nations' body – volunteering to visit Chernobyl, site of the world's worst nuclear accident over 3 decades ago, and now in Russian hands, to reach a "framework" for nuclear safety amid the fighting.
Zelensky today again urged the Nato military alliance – of which his country isn't a member – to impose a no-fly zone, shooting down Russian aircraft.
But "Nato is not part of the conflict. We don't seek war, conflict with Russia," said the alliance's head Jens Stoltenberg on Friday, calling on Moscow to cease its "brutal" invasion and praising Nato member states for imposing "unprecedented sanctions" on Russia.
Beyond the sanctions imposed by Western governments, private corporations yesterday refused to bid for Russian crude oil according to trader Trafigura.
"The Perth Mint is not currently willing to sell or deliver gold to Russia," said the Australian refinery's acting chief executive Jane King today.
Gold-mining start-up Wiluna (ASX: WMC) meantime suspended its shipments of concentrate for processing by Russian miner Polymetal (LON: POLY) after making its maiden delivery only 2 weeks ago.
"Commodities soar as war increases anxiety over supply shortages," says a headline at Bloomberg, with European benchmark Brent crude oil now at new 8-year highs above $114 per barrel.
The yield offered to new buyers of Western government debt meantime fell sharply once more, pulling 10-year US Treasury rates down to 1.77% – nearly 0.3 points below mid-February's 30-month highs – despite new data saying that the world's largest economy added 678,000 jobs last month, over 2/3rds more than analysts expected.