END_OF_DOCUMENT_TOKEN_TO_BE_REPLACED

GOLD ETF TRADING volumes retreated from the last 2 session's spike to new 2019 highs on Tuesday, easing back as Western stock markets rallied and bullion prices edged back from new multi-month highs.
Gold traded $7 lower from an overnight top of $1329 per ounce after jumping 1.8% on Monday.
Chinese equities fell but Tokyo held flat and European stock markets rallied for a second day off last week's new 3-month lows.
Crude oil prices dropped for a 6th session running however, and copper slipped back towards last week's 4-month lows.
Gold for Australian miners and investors meantime set fresh all-time record highs on Tuesday, breaking January 2019's top at A$1902 per ounce after the Reserve Bank cut its key lending rate in the face of fast-weakening data.
Capital investment by Australian businesses fell 1.7% per year in Q1 while construction work fell by 1.9%.
New home sales then fell 12% in April as building permits sank by 24% and private credit growth slowed.
No.1 gold ETF trust fund the SPDR product (NYSEArca: GLD) yesterday saw the largest 1-day growth in its number of shares in issue since July 2016 – aftermath of the UK's shock Brexit referendum decision – needing an extra 16.4 tonnes to back the value of investor positions.
"Weak sentiment around the breakdown in the US-China trade relationship has seen investors seek safe-haven assets," Reuters today quotes Australian bank ANZ's analyst Daniel Hynes.
"Weakness in equity markets and clearly the indications of a rate cut in the US has...driven investors back into to the gold market."
The GLD has seen heavier inflows on only 35 of the 3,656 trading days since it launched in November 2004.
But that jump only took the GLD's total size to its largest in 2 months below 760 tonnes.
US and UK bond yields meantime rose Tuesday but Eurozone government borrowing costs fell yet again, taking 10-year German Bund yields 0.21% below zero.
That effectively charges new buyers the most to hold Berlin's debt since the summer 2016 panic following the UK's shock Brexit referendum result.
Adjusted for inflation expectations, 10-year US Treasury yields ended last week at their lowest since September 2017.
On a weekly basis, Dollar gold prices have moved in the opposite direction to real 10-year T-bond rates 65% of the time over the last 5 years. 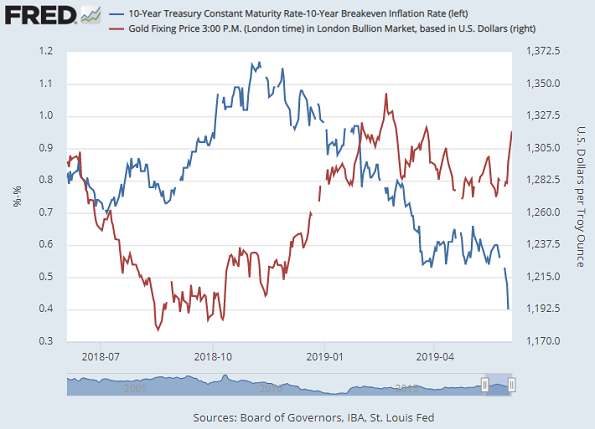 Back in ETF gold trading, New York's 2nd largest gold trust, the iShares product (NYSEArca: IAU), was unchanged in size Monday, as were the Sprott closed-end funds.
Lower-cost US gold ETFs from Aberdeen Standard (NYSEArca: SGOL), SPDR (NYSEArca: GLDM) and GraniteShares (NYSEArca: BAR) saw no net inflows or outflows on Monday.
Also unchanged in size was Europe's leading gold ETF, the Xetra product, but the UK-listed ETFS trust now run by WisdomTree (LON: PHAU) expanded by 0.5% as the UK gold price in British Pounds rose to its highest level since Donald Trump's victory in November 2016's US presidential election.
UK investors today saw prices rise further, ticking above £1050 per ounce and gaining 16.8% from last October's dip beneath £900, the lowest level since the eve of June 2016's Brexit referendum.
Monday's jump in gold prices saw trading volumes in Comex futures contracts reach only a 4-session high, but more leveraged and speculative options contracts saw volume rise to nearly 3 times the prior week's average.
Seperate data from the CME futures exchange meantime says that, while trading in interest-rate contracts now puts an 86% chance on the Federal Reserve holding its key rate unchanged at the June meeting in 2 weeks' time, over halve of speculative betting foresees a cut in July.
Nearly 6-in-7 bets for September then expect lower Fed rates by the end of that month's meeting.