END_OF_DOCUMENT_TOKEN_TO_BE_REPLACED

GOLD PRICES touched 2-week highs above $1740 per ounce in London trade Tuesday, ignoring yet more investor outflows from gold-backed ETF trust funds and gaining $10 amid a raft of unexpectedly weak US economic data as the US Federal Reserve began its March policy meeting.
World stock markets rose to fresh all-time highs as the Fed met to discuss its zero interest-rate and record QE bond-purchasing policies in the face of new President Biden's historic $1.9 trillion Covid stimulus package.
The bond market struggled to rally, holding longer-term government borrowing costs near their recent multi-year highs.
Oil meantime led a retreat in commodity prices Tuesday, losing $1 per barrel to $67 for Brent crude as the surge in Iran's oil exports to China were seen "hurting" the Opec+ cartel of producer nation's efforts to limit output and support prices.
$1700 is "an important level" for gold prices, says the precious-metals team at French bank and London bullion market maker BNP Paribas.
"It broke on the downside only this month and, looking back one year, it’s also a pivotal level around which the gold price traded for a while after the pandemic-induced market breakdown."
Looking at gold-backed ETF investment funds, "Long liquidation persists," BNP goes on, "but it's a fading flow which may indicates that current holders are comfortable with their gold holdings now."
The giant GLD yesterday saw its 9th consecutive day of investor outflows, shrinking to the smallest since late-April 2020 and down by more than 1/10th so far this year, as its competitor the IAU also shrank yet again. 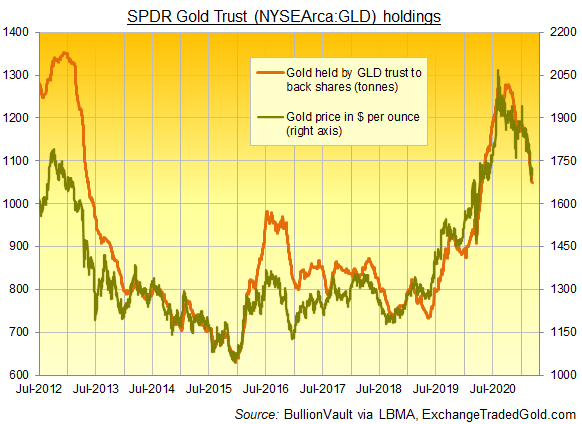 "More concerning," says BNP's note, is the "meaningful decrease" in bullish among hedge funds and other money managers betting on Comex gold futures and options, now down to the weakest since June 2019.
After Comex gold futures climbed to their highest finish in nearly 2 weeks overnight, prices in China – the metal's No.1 consumer nation – today cut their premium to global quotes in half, retreating to offer an incentive of $5 per ounce to new imports but staying positive after last year's historic discounts showed a collapse of domestic demand against supply amid the Covid Crisis.
The MSCI World Index of developed-economy equities today ticked 0.3% higher as New York opened, edging ahead of the most recent record-high close – set 1 month ago today – and extending its gains from the Covid Crash low, hit 12 months ago this week, to more than 71%.
Platinum prices dropped $20 in an hour from this morning's 3-week highs near $1237, and silver prices also retreated in contrast to gold, dropping back below $26 per ounce and unchanged for the week so far as 10-year US Treasury bond yields slipped to 1.58%, down 6 basis points from last week's 13-month peak.
Japan's industrial output for January today showed a 5.2% year-on-year drop, in line with analyst forecasts.
Data from France and Italy – the Eurozone's 2nd and 3rd largest economies – also met predictions for last month's consumer-price inflation at 0.8% and 1.0% per year respectively, and economic sentiment across the 19-nation currency union, the world's 2nd largest economic bloc, has now edged ahead of last September's Covid rebound to set the highest reading on the ZEW survey since 2004, separate figures said Tuesday.
But with the US Fed now starting its 2-day March meeting, new data today said the world's largest economy saw both import and export prices rise faster than analysts expected last month, while industrial production sank 2.2% from January – pulling capacity utilization down to what would have been an 11-year low if not for 2020's Covid Crash – and retail sales fell 3.0% for the month, worsened by a drop in auto demand.
"At least part of the weak production and retail sales numbers are weather-related," reckons one asset management strategist, pointing to February's dramatic snowstorms across the south-western USA.
Last month's freak winter storms in the south-western US killed at least 57 people in Texas, mostly from hypothermia.
Griddy Energy, the electricity firm which sent 4-figure energy bills to Texan households trying to heat their homes using their air-con units, yesterday filed for bankruptcy, saying that the state regulator "destroyed our business and caused financial harm to our customers" by letting wholesale prices rise to their statutory limit of $9 per kilowatt hour.
Despite the surge in Washington's deficit spending, "Interest payments on US national debt fell last year," says Bloomberg, dropping to 1.6% of gross domestic product.
Interest payments will fall below 1% of GDP in 2024 on the news-wire and data agency's analysis, before rising above 2% by 2031.