END_OF_DOCUMENT_TOKEN_TO_BE_REPLACED

GOLD PRICES showed a $10 per ounce loss for the week Friday afternoon in London, trading at $1725 as global stock markets rose, as did longer-term interest rates, alongside further currency gains for the US Dollar.
New US president Joe Biden yesterday doubled his target for Covid vaccinations in the world's largest economy.
Crude oil prices today reversed most of this week's earlier 6% plunge, rallying above $60 per barrel of US benchmark WTI as international cargo ships began being diverted around South Africa's Cape of Good Hope to avoid the Suez Canal, still blocked to all traffic by a grounded container ship.
US Treasury bonds meantime fell in price, edging yields back towards last week's pre-pandemic levels, after an auction of new 7-year debt – needed to help fund Biden's historic $1.9 trillion stimulus – met what the Financial Times calls "below-average investor demand."
"[It's] a timely reminder that the backdrop points to higher rates," the FT quotes Dutch bank ING.
"It seems that rates have responded to news about vaccination and ultimately about growth," said US central-bank chief Jerome Powell this week to the Senate Banking Committee. "And that has been an orderly process" he said of the fastest ever year-on-year jump in bond yields.
Gold prices have remained "rangebound" this week but with "sometimes violent moves as the rising greenback dampens safe-haven demand," says the trading desk of Swiss refiners and finance group MKS Pamp.
The Dollar today rose to new 4-month highs on its trade-weighted index against other major currencies.
The price of gold has now lost over $200 per ounce since the Dollar hit 30-month lows this New Year, dropping 11.3% for US investors against a 7.1% drop in terms of the Euro currency. 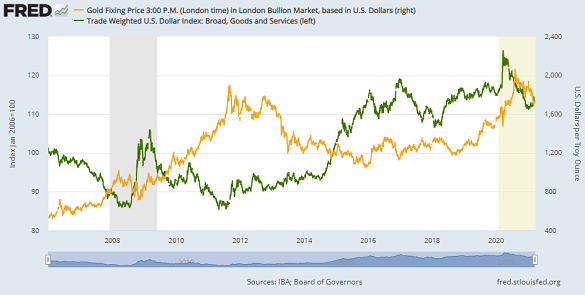 "Worldwide interest rates are on a downward trend," claimed Turkish government advisor Yiğit Bulut to CNN Türk TV today, defending President Recep Tayyip Erdoğan sacking his third central-bank chief in two years for raising Lira interest rates in the face of surging inflation.
The MSCI World Index of developed-economy stock markets meantime edged 0.3% higher but held nearly 2% below mid-March's peak, when it tried but failed to top last month's new all-time high.
Silver prices again failed to rally above $25 per ounce, holding 90 cents above yesterday's new 9-week low.
Platinum – which finds its single largest use in autocatalysts to hurt harmful engine emissions – cut its weekly drop to $35 per ounce at $1163 as giant automaker VW said it is seeking damages from former chairman Marin Winterkorn over the 2015 dieselgate scandal.
Today's data releases said No.4 Eurozone economy Spain shrank 0.2 percentage points less across 2020 than previously estimated, with GDP down 10.8% on the INE update.
UK retail sales fell less year-over-year than analysts expected in February once fuel demand is excluded, down 1.1%.
The UK gold price in Pounds per ounce today held unchanged from last Friday's London benchmark at £1252.
US consumer prices meantime rose only 1.4% per year last month on the Federal Reserve's preferred core PCE measure of inflation, slowing from January's pace, while the world No.1 economy trade deficit in goods grew to $86.7 billion, just shy of last November's new record.
Consumer prices in Tokyo, the world's most heavily populated metropolitcan area, have fallen 0.2% this month from March last year, while Germany's business climate has improved again despite the No.1 Eurozone economy's new anti-Covid lockdown.
Reaching its highest in almost 2 years however, the Ifo index of business managers' confidence is still at what was the lower-end of the last decade's range before the pandemic struck in 2020.
Euro gold prices rose 0.5% across this week to €1467, down €10 per ounce from Wednesday's brief spike to 1-month highs.