END_OF_DOCUMENT_TOKEN_TO_BE_REPLACED

GOLD PRICES hit and rallied from 1-week lows Thursday in London, falling within $10 per ounce of $1800 as crypto currencies sank and global stock markets extended yesterday's steep drop on Wall Street following news of the strongest 'core' inflation in the USA for 25 years.
Japan's Nikkei lost 2.5% as Taiwan's main index, home to major electronics and semiconductor suppliers, saw its worst 1-day drop since March 2020's Covid Crash.
US Treasury bonds fell in price yet again, pushing 10-year yields up to 1-week highs of 1.7% per annum after yesterday's core CPI figure came in 3.0% above April last year, the fastest inflation since January 1996.
European borrowing costs jumped faster however, hitting the highest in 2 years today as benchmark UK Gilt yields rose above 0.9% per annum and Germany's benchmark Bund yield – which has now been negative since May 2019 – came within 0.1% of zero.
"Stocks plunged because investors are terrified of inflation, which is now a reality," says Barron's magazine of yesterday's Wall Street drop.
"If you're valuing a high-growth company based on its earnings ten years out," adds an analyst to Reuters, "those earnings into the future are worth a lot less today at higher inflation levels."
Gold and the tech-heavy Nasdaq index of US-listed corporations last year showed an unlikely coupling, both surging as lockdown drove a collapse in economic activity and interest rates but a boom in home shopping, teleconferencing and streaming entertainment. 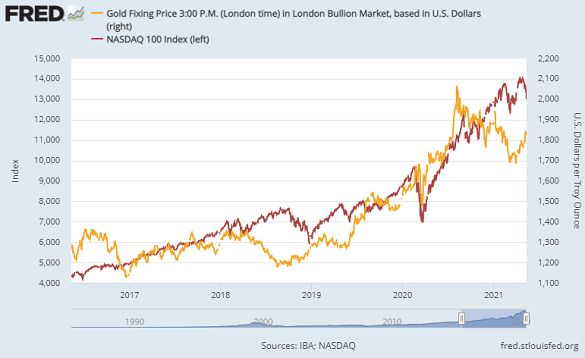 "Inflation is a tale of two markets for gold," says the precious metals team at French bank and London bullion market maker BNP Paribas.
"On the one hand, higher inflation will lead the Federal Reserve to drop the dovish tone and come back into a more conservative policy of interests rates hike in the medium term.
"On the other, if...higher inflation persists...people's purchasing power will suffer in many parts of the world. Gold being a global asset, liquid and available, could see more investment demand from retail accounts across the world, in a bid to shield their hard-earned cash against loss of purchasing power.
"Maybe cryptocurrencies can also do the job but I believe that, in the case of unexpected inflation, people would direct their wealth into tried and tested products."
Already falling after the US inflation data, Bitcoin sank over 12% in barely an hour last night after tech-celeb Elon Musk said his electric-car company Tesla (Nasdaq: TSLA) will stop accepting the so-called crypto-currency in payment for new customer orders, blaming the "insane energy use trend" in its proof-of-work creation and confirmations.
Comedy-crypto Dogecoin – worth almost $100bn at last week's peak, matching the market cap of giant German automaker VW – meantime fell below $0.40 for the 1st time in 10 days, down by 45% from the eve of Musk promoting it on Saturday's US entertainment show SNL.
"Do you want Tesla to accept Doge?" Musk asked his Twitter followers only on Tuesday, pulling 3.9 million votes with 78% saying "Yes".
Tesla put $1.5 billion of its corporate cash into Bitcoin February and began accepting it from customers to much fanfare in late-March.
Shares in TSLA have now fallen by one-third from January's record high. Even after today's plunge, DogeCoin has jumped 75-fold so far in 2021.
Going into Wednesday's inflation data report, "Gold initially tested the resistance band through $1840-1845 into the CPI print," says today's trading note from Swiss refining and finance group MKS Pamp, "however it collapsed to a session low of $1814 late in trade.
"Key down-side supports around $1800-1795 are now in play."
Silver meantime extended the drop in gold prices Thursday, falling through $27 per ounce as platinum fell back near $1200, erasing last week's 4.7% gain.