END_OF_DOCUMENT_TOKEN_TO_BE_REPLACED

YESTERDAY's gold price gains of 1.5% were cut in half Tuesday morning as Shanghai stayed shut for China's Labor Day holidays but London's bullion market returned from the UK's May bank holiday.
Gold prices then regained half of that $15 per ounce drop from Monday's re-test of late-April's 2-month highs above $1797, rallying as the US Dollar slipped from 2-week highs on the FX market following a run of strong US economic data.
So-called 'meme' crypto Dogecoin – launched as a 'silly joke' in 2013, four years after original 'digital currency' Bitcoin – meantime leapt to a new all-time high, up 100-fold for 2021 so far, after it was added to online brokerage eToro. 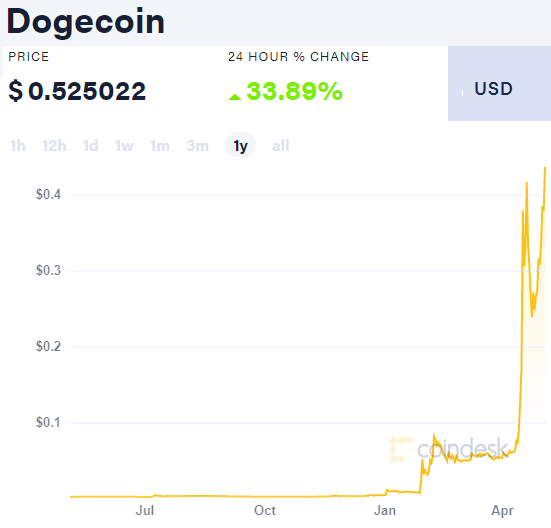 Low-cost stock and crypto-trading platforms led by Robinhood have "become a very significant part of the casino aspect, the casino group, that has joined into the stock market in the last year or year and a half," said legendary fund manager Warren Buffett on Sunday at the annual general meeting of Berkshire Hathaway (NYSE: BRK.A) shareholders.
"No one should believe that Robinhood's trades are free," said his No.2, Charlie Munger, calling the platform's marketing " dishonorable and low-grade" and also adding that "Of course I hate the Bitcoin success.
"I think the whole damn development is disgusting and contrary to the interests of civilization."
Munger and Buffett have repeatedly disparaged gold investing in the past, calling it "unproductive", with a position in giant gold miner Barrick (NYSE:GOLD) bought in spring 2020 entirely sold by the end of December.
"There is an old guard that doesn't want average Americans to have a seat at the Wall Street table so they will resort to insults," says a reply from Robinhood, which tags its corporate comms 'Democratizing finance for all'.
Buffett and Munger are " adversaries of [the] future and of change," adds the brokerage's head of public policy communications, former Democrat Party staffer Jacqueline Ortiz Ramsay.
"[They] have enjoyed plentiful privileges in the past and don't want these privileges disrupted."
Robinhood said it added 6 million users in the first two months of 2021 alone, while its potential value – as judged by investment banks involved in a potential stock-market launch – doubled to $40bn.
With Japan's stock markets also closed like China for the 2nd of 3 national holidays, Asian equities slipped on Tuesday and European shares also struggled after hitting fresh all-time highs last week.
Priced in the Euro gold bullion was firmer, holding 0.9% higher for the week so far at €1484, while the UK gold price in Pounds per ounce edged near its highest since mid-February above £1292 per ounce.
Nearly 7 in 10 of respondents classed as the 'Millennial' generation are now more open to using crypto-currencies than they were a year ago, says a widely reported survey from global payments giant Mastercard.
"Shares of Berkshire Hathaway are up 50.5% in the last 52 weeks," says a post on crypto news and price site Coindesk.
"The price of Bitcoin is up better than 500% in that same time period."
April saw another month of outflows from gold-backed ETF trusts, albeit slowing to 2.0% at the giant SPDR product (NYSEArca: GLD) from 5.2% in March and 5.9% in February.
Competitor gold ETF the iShares Trust (NYSEArca: IAU) also saw shareholders cut their pace of liquidation, down from 3.1% in March to 1.6% last month.