END_OF_DOCUMENT_TOKEN_TO_BE_REPLACED

GOLD BULLION fell back Wednesday after a weak rally from new 3-week lows, briefly dipping below $1780 per ounce ahead of the US Thanksgiving holidays despite another strong inflow of investment money into the giant GLD gold-backed ETF.
Global stock markets also fell, heading for the 4th consecutive loss on the MSCI World Index as the US Dollar continued its rise towards 18-month highs against other major currencies following the re-nomination of Jerome Powell as head of the Federal Reserve on Monday.
Silver prices gave back half of their 40-cent rally from the cheapest since 3 November at $23.30 per ounce, while so-called crypto currency Bitcoin also fell again, trading almost 20% below 10 November's fresh all-time high, down near its cheapest since mid-October at a price first achieved this February.
Gold bullion priced in Dollars first reached today's level in August 2011. Back then, the SPDR Gold Trust (NYSEArca: GLD) was more than 25% larger than today in terms of the number of shares in issue.
Yesterday's steep price fall in bullion saw the world's largest gold ETF expand to need a further 6.1 tonnes of gold to back its shares, snapping its more typical pattern of growing when prices rise.
Over the last 15 years, the size of the GLD and the price of gold in Dollars have moved together 60.0% of the time on a 5-day basis.
From a week ago, the GLD has now expanded by almost 1.6%, its steepest increase since the very start of the year. It has grown that much or faster only 7 times in the past 15 years when gold prices felling this hard or worse.
The last 2 occasions – November 2011 and September 2020 – marked strong volatility in bullion as it retreated from what then proved to be significant all-time highs. 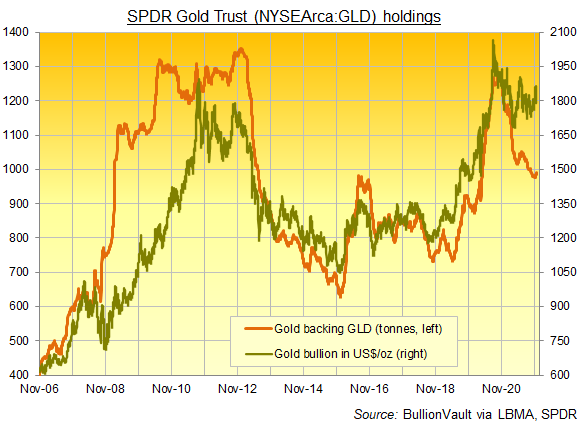 "From a technical perspective," says a note from precious-metals refining and technology specialist Unicore, "the $1780 level should be well defended on the downside, while on the upside, a sustained close above $1830-1850 is needed for gold to resume its upward momentum."
More fundamentally, "the bond markets appear to be discounting an increasingly hawkish view on inflation" from the US Fed, says Rhona O'Connell at bullion, commodities and equity brokerage StoneX.
"This seems counterintuitive given Powell's dovish stances thus far...but it could be that [the sell-off in bonds, driving short-term yields higher] was a reaction to Powell winning over Brainard, who is thought to be something of an arch-dove" and is now moving to vice-chair of the US central bank.
New data on Wednesday showed stronger-than-expected inflation denting US economic growth in real terms between July and September, with Q3 GDP missing analyst forecasts of 2.2% annual expansion by 0.1 points as the PCE measure of costs rose at the fastest pace since the end of 1990 at 4.3% per year.
That data saw a pause in this week's drop in major-government bond prices, capping the rise in longer-term interest rates.
Ten-year borrowing costs for the US Treasury today touched 1.68% per annum, the highest in a month.
Two-year US yields meantime held at 0.63%, also dramatically below the current 3-decade highs in US inflation but offering the best return to new buyers since the Covid Crisis began in March 2020.
Gold bullion for Euro investors today bounced €10 per ounce off last nights 2-week low of €1582.
UK gold prices in Pounds per ounce rallied £5 from yesterday's 3-week low of £1331.