END_OF_DOCUMENT_TOKEN_TO_BE_REPLACED

GOLD BULLION held around 1-week highs against a weaker US Dollar in London trade Friday, cutting earlier losses in Sterling and Euro terms as global stock, bond and commodity markets extended this week's rally despite fresh hikes to central bank interest rates.
Trading at $1726 per ounce, gold bullion showed a 0.8% rise from last Friday's 7-week closing low.
Both the giant GLD and No.2 gold ETF the IAU however saw net investor outflows again on Thursday, shrinking the quantity of bullion needed to back their shares to the smallest size since March 2020 and February 2022 respectively.
"Gold is really a reflection of the market [view] on central bank policies and right now, it's [showing] faith in a soft landing," says George Lequime, manager of the UK's Amati Strategic Metals fund, "that the Fed will be able to raise rates and bring inflation under control" without crashing the economy. 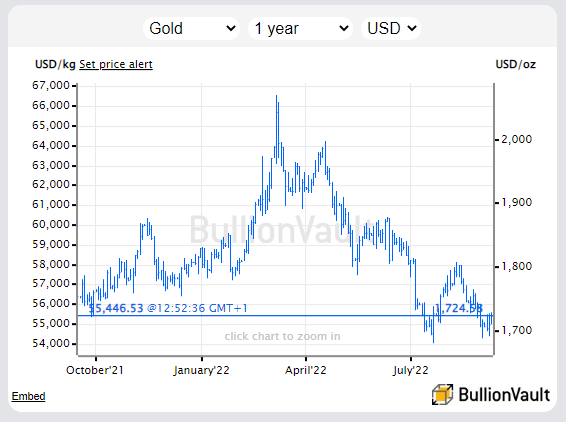 Prices for gold bullion landed in China – the precious metal's largest consumer country – today rose towards 2-week high near ¥390 per gram even as the Yuan rallied on the FX market.
That helped the Chinese gold premium to finish the week at an average $25 per ounce, sharply above the typical level of $8 and the highest incentive for new inflows of bullion – currently constrained by a lack of import quotas amid quiet trading on the Shanghai Gold Exchange – since 2016.
With the US Fed now certain to hike overnight Dollar interest rates by 0.75 percentage points for a 3rd meeting in a row on 21 September according to betting in the futures market, the central bank of China – the world's 2nd largest economy – may struggle to cut its lending rates enough to reverse the slowdown in GDP growth, says the South China Morning Post.
"China is still facing the choice between interest rates and the foreign exchange rate," the SCMP quotes Liang Zhonghua, macro analyst at Shanghai-based brokerage Haitong Securities.
"As such, if the [currency] depreciation pressure is growing, the easing of monetary policy will see some constraint."
The British Pound meantime rallied after news that Queen Elizabeth II died on Thursday, adding almost 1.5 cents to touch 1-week highs 2.1% above the 4-decade low of $1.14 set just ahead of new UK Prime Minister Liz Truss announcing a £150 billion package ($175bn) of borrowing-funded state aid for consumer-and-business energy bills.
"Will fiscal policies generate inflation? We are here to ensure that they don't," said Bank of England economist Huw Pill this week, predicting that while state-aid to curb energy bills while paying suppliers full-market price will reduce New Year 2023's expected peak in UK consumer-price inflation, it will push the cost-of-living higher in the longer term and require higher interest rates to curb pricing pressures across the world's 6th largest economy.
Friday's bounce in Sterling capped the UK gold price in Pounds per ounce below £1488, unchanged for the week.
The gold price in Euros meantime slipped again as the single currency rose further following yesterday's record interest-rate hike by the European Central Bank – now paying 0.75% per annum on deposits in the face of 9.1% annual inflation – heading for its lowest weekly finish since mid-July.
"We are no longer competitive in a market that is 25% supplied by imports," said Reiner Blaschek, CEO of world No.2 steelmaker ArcelorMittal last week on switching off one of its two furnaces in Bremen, Germany, due to the high cost of gas and electricity.
"We see an urgent need for political action to get energy prices under control immediately."
Germany's Chancellor Olaf Scholz on Sunday announced a €65 billion ($65bn) package of state aid for consumers and business, declaring that "we will get through this winter" despite surging energy costs and an 80% drop in Russian supplies of natural gas to the 27-nation European Union in response to financial sanctions over Moscow's latest invasion of Ukraine.
"It is a perfect storm against our citizens and companies," says Italy's energy transition minister Roberto Cingolani, joining calls to extend today's proposed EU cap on the price paid for Russian gas to all international and domestic sources for fear of what other officials say will be "retaliation" by an "infuriated" Moscow.
"The ECB will deliver on price stability, its top priority," said the 350-million citizen Eurozone's central bank chief Christine Lagarde at Friday's meeting of Eurogroup policymakers in Prague.
Slashing GDP forecasts while raising cost-of-living predictions dramatically in Thursday's ECB rate-hike decision, "We won't let price expectations get out of control," she added today.
Germany's 2-year government bond yield yesterday touched 1.40% per annum, the highest such borrowing cost since mid-2011, before easing to 1.30% on Friday.
Comparable costs for Italy's government borrowing – now totalling more than 150% of the country's annual economic output, behind only Greece in the 19-nation Eurozone – meantime peaked above 2.40% per annum today, the highest in a decade.
Late-September's snap election in Italy, called after former ECB president Mario Draghi lost the support of both right-wing and left-wing politicians, will see a centre-right coalition led by the 'post-fascist' Brothers of Italy win by a landslide according to the latest opinion polls.