END_OF_DOCUMENT_TOKEN_TO_BE_REPLACED

GOLD BULLION held onto most of yesterdays steep climb in US Dollars and all other major currencies on Friday after gold-backed ETFs expanded following the Federal Reserve's decision to leave interest rates at record lows near zero while continuing with record-high levels of QE bond buying.
Trading at $1826 per ounce as the Dollar sell-off paused today, gold bullion in July reversed half of June's 7.2% drop, gold's steepest fall in 5 years.
The UK gold price in Pounds per ounce also cut June's loss in half as July ended today, trading at £1309 while the Euro price of €1536 meant bullion recovered almost 70% of last month's drop.
Gold premiums in China compared to global quotes stayed soft however, suggesting weak demand in the metal's No.1 consumer nation as No.2 India saw dealers offering deeper discounts on Friday amid the traditionally weak summer period.
Global stock markets meantime fell – led by "volatile" Chinese equities hit by fresh fears of Beijing's regulatory crackdowns – after rising to a new all-time high Thursday, the 8th fresh record high this month on the MSCI World Index.
Both the giant GLD gold ETF and the smaller US competitor the IAU grew on Thursday, the first such increase since 1st June and putting both on track for weekly growth for the first week in six.
iShares Silver ETF in contrast (NYSEArca: SLV) was unchanged in size, leaving it at the smallest since mid-December 2020 and shrinking on a weekly basis by 0.6%.
"ETF investors are continuing to wait on the sidelines and are apparently unwilling to buy gold," says German bank Commerzbank.
"For the gold price to begin making noticeable and lasting gains again, however, it needs this group of investors to buy."
"Another confirmation of investor sentiment comes from the assets held by the 3x leveraged gold ETF," says former HSBC fund manager and now Bitcoin-and-gold specialist Charlie Morris of ByteTree, pointing to the Credit Suisse product (OTCMKTS: UGLDF) shrinking by two-thirds when compared to all gold ETFs since bullion prices peaked above $2000 per ounce at the start of last August. 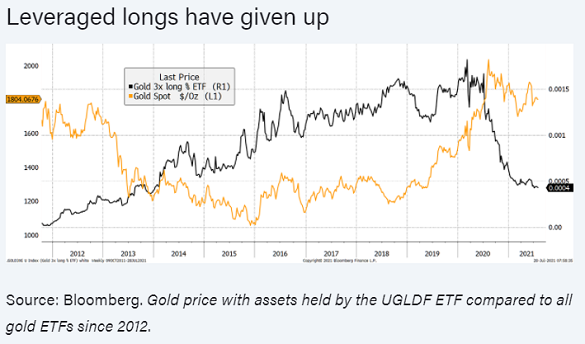 "The simple reading is that investors have given up. When that happens, and the fundamental outlook is attractive, that makes gold a contrarian idea, which is generally a comfortable place to be."
Across the giant gold consumer nations of China and India, household gold jewelry, coins and small-bar demand jumped 77.2% in January-June from the first half of 2020's Covid Crash according to new data from specialist consultancy Metals Focus, published this week by the mining industry's World Gold Council.
But China and India's combined first-half gold demand was still less than 9/10ths of the 5-year average prior to the pandemic.
Shanghai premiums today fell back to $4 per ounce above London quotes, less than half the typical incentive for new imports pre-Covid, while prices in India – after accounting for import and sales tax – showed a $4 discount according to Reuters.
"Jewelry stores are open, but retail buying is not picking up because of the price rise," says a Mumbai bullion-bank dealer.
A "cumbersome, time-consuming process" for registering newly hallmarked jewelry with the Indian authorities online – mandatory since mid-June – is also hurting smaller retailers, says the All India Gem & Jewellery Domestic Council.
"We expect continued improvement in the consumer elements of demand for the rest of the year," the Financial Times quotes Louise Street at the WGC.
"[But] people lost their jobs or their sources of income dried up due to the economic turmoil caused after the lockdown," says Haresh Acharya, director of Indian trade association the IBJA.
"To cushion personal finance needs, many sold off their gold and gold jewellery since the pandemic."
"As domestic silver prices remain elevated [in Rupee terms], silver demand has [also] failed to recover," says Metals Focus in its latest weekly note, with imports collapsing by 96% year-on-year in the first half of 2021.
"Our research suggests that investor selling [of silver] has continued [but] we do not expect to see net disinvestment across 2021."
India's booming gold loans market – where households pledge jewelry or other gold items to raise lower-cost finance – has "picked up" further still in July according to industry figures.
Late repayments are also growing, with more than 13% of all missed payments to Federal Bank coming on gold-backed loans between April and June, says the Economic Times.
"Although lenders say the pain is transitory, the [next] quarter is crucial for this portfolio to not become a big source of non-performing assets."