END_OF_DOCUMENT_TOKEN_TO_BE_REPLACED

GOLD BULLION rose to new 5-month highs against a rising US Dollar on Tuesday, touching $1877 per ounce as energy-price inflation jumped again amid new political tensions between Russia and the West and after China's President Xi told US President Biden that "if you play with fire, you will get burned" regarding Washington's support for Taiwan's independence.
Euro gold bullion prices touched the highest in 54 weeks as Germany's energy regulator halted approval of the controversial Nord Stream 2 pipeline from Russia, citing a paperwork error, sending European gas prices to 3-week highs, with Dutch TTF Gas Futures for December settlement now costing 6 times more than this time last year.
Rising to €1645 per ounce, gold bullion in large wholesale bars has only traded higher on 23 trading days before now. 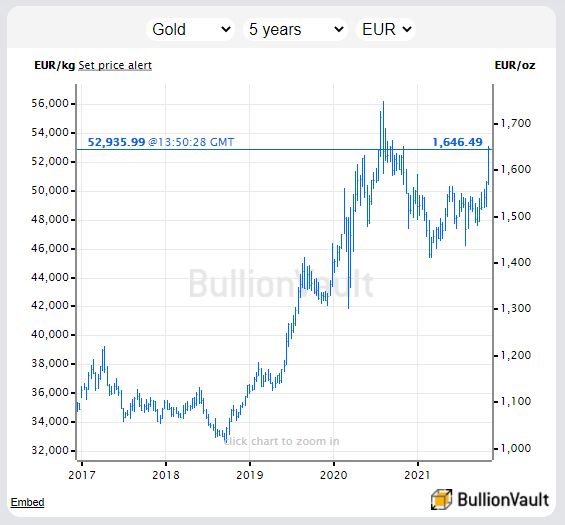 Global stock markets held little changed overall as the Xi-Biden online summit saw both leaders stress their desire for peace and co-operation, helping edge equities back up towards last Monday's new all-time high on the MSCI World Index.
As perhaps 90,000 Russian troops mass on Ukraine's eastern borders, Western Europe must choose between paying Moscow for gas or supporting Kyiv's independence, UK Prime Minister Johnson said in a speech last night, also backing new European sanctions against Belarus over the Polish-border migrant crisis.
With wind turbines producing less than 1/5th of the UK's electricity today, the wholesale auction of UK electricity for provision tomorrow come in with an average price of £176 per Megawatt-hour, more than 3 times the average price in November last year but 15% below mid-October's weekly record.
The UK gold price in Pounds per ounce today touched its highest since New Year, rising to £1395 per ounce even as Sterling rallied on the FX market following stronger-than-expected jobs and wages data.
After the UK and Japan both reported weak GDP number for the July-to-September period, the 19-nation Eurozone today confirmed quarterly economic growth of 2.2%, with total employment growing 0.9%.
Inflation in both France and Italy – the Eurozone's 2nd and 3rd largest national economies after Germany – today came in at 3.2% for October, the highest since 2008 and 2012 respectively.
French borrowing costs in the bond market edged slightly higher to 0.12% per annum on 10-year Oats, markedly below May and October's post-pandemic highs of 0.28%.
Italy's 10-year borrowing costs also held today at what were record all-time lows when first hit during early 2020's Covid Crisis, edging below 0.98% after touching 15-month highs in late-October at 1.23%.
"We still see inflation moderating in the next year," said European Central Bank chief Christine Lagarde to politicians in the European Parliament yesterday, "but it will take longer to decline than originally expected.
Even so, "the outlook for inflation over the medium term remains subdued, and thus conditions [for raising interest rates] are very unlikely to be satisfied next year."
Crude oil today rallied back above $81 per barrel of WTI as US politicians urged Biden to release stocks from the Strategic Petroleum Reserve.
US coal prices meantime hit their highest since 2009.
The People's Bank of China today announced a lending program aimed at enabling $1 trillion-worth of annual investment in clean-energy projects.
"[But] before asking all countries to stop using coal," said China's foreign ministry on Monday, less than 3 days after the COP26 climate-change summit ended in Glasgow, "consideration should be given to the energy shortfall in many developing economies."
Tokyo today said it plans to continue giving state subsidies to 5 domestic crude oil refiners to try capping petrol prices at the pump.
Silver prices rose alongside gold bullion but failed to outpace the rising Dollar for the week so far, holding unchanged from last Friday's finish at $25.30 per ounce after slipping below $25 yesterday.
Platinum rose faster, matching gold with a new 5-month Dollar high at $1105.
So-called crypto currency Bitcoin meantime sank to its lowest in 3 weeks, dropping 8.5% for the day and 12.9% from last Wednesday's new all-time high.