END_OF_DOCUMENT_TOKEN_TO_BE_REPLACED

GOLD BULLION recovered from 1-week lows against the US Dollar in Asian and London trade today, edging 0.4% higher from last Friday's finish as global interest rates slipped and equities headed for 0.8% gains on the MSCI World Index following dovish policy comments from 3 major central banks.
But despite the Bank of England revealing that it's preparing to impose negative UK rates, while the Bank of Japan said it will support new prime minister Yoshihide Suga's commitment to extend the huge deficit spending of 'Abenomics', both the Pound and the Yen gained value against gold this week, edging bullion down 1.0% and 1.5% respectively at £1503 per ounce and ¥6,540 per gram.
Wholesale bullion in Dollar terms meantime touched $1950 per ounce today – a new record high when first reached in late July – after the Federal Reserve on Wednesday projected a drop in real US interest rates from today's level of minus 1.5% per year to minus 2.0% by 2023 as it keeps borrowing cost near zero but inflation rises. 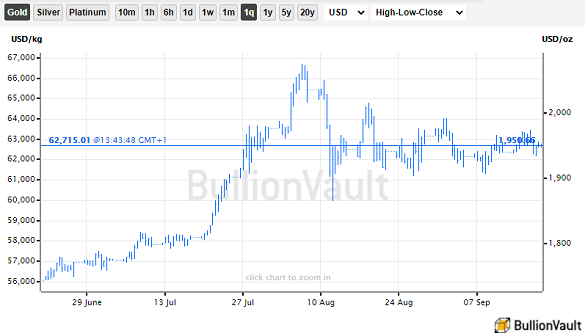 Real rates on inflation-protected 5-year US Treasury bonds today fell to minus 1.35%, down 8 basis points from last weekend but still above end-August's 8-year low of 1.41%.
Longer-term TIPS rates also moved lower, falling 3 basis points for the week but also remaining above last month's lows on 7, 10, 20 and 30-year debt.
Gold's lacklustre response to the Fed's "just right" verdict on its current policies suggests that "the gold price can trend lower and test $1870 again," says a note from one London bullion desk, as "a combination of signals, coupled with more good news on Covid-19 vaccines, will keep weighing in the short-term.
"[But] in the grand scheme of things, this does not alter long-run bullish sentiment as monetary and fiscal policy remain supportive of hard assets. The US Election is [a] risk which keeps investors wary of dishoarding too much of their gold."
Thursday saw world stock markets slip "despite improving jobless numbers and dovish commentary by the central banks," says another bullion desk.
Both new and continuing claims for US jobless benefits showed a slowdown on the latest data, while August's 5-year low in the UK's annual inflation rate – pushed down by government subsidies to meals out and temporary cuts to VAT sales tax – today saw retail sales across the world's 6th largest economy reported at their fastest annual jump since Spring 2019, up 4.4% when fuel for autos is excluded.
Industrial orders in Italy fell less year-on-year than analysts expected in July, down 7.2%, while Germany's deflation in factory-gate prices also eased, slowing to 1.2% per year.
Wholesale gold bars priced in Euros traded 0.5% above last week's finish this Friday lunchtime, holding at €1648 per ounce.
Looking at Dollar gold prices, Swiss bullion bank UBS this week raised its 2021 target from $1850 to $2100 per ounce, with head of Asean markets Yeoh Choo Guan telling CNBC today that "We are very bullish on gold...prices will go higher and stay higher for longer than expected."
The two largest US gold ETFs – the SPDR and iShares' products – both ended Thursday virtually unchanged in size, leaving the GLD at what was its largest size in 7 years when reached in early August, while the smaller IAU extended its longest stretch without growth since mid-March's 2.3% liquidation.
The world's largest silver-backed ETF – the iShares Silver Trust (NYSEArca: SLV) – meantime shrank again, taking its net liquidation to 104 tonnes across the last week.
That's equal to around 25% of global silver mining output over the same period.
Silver prices today tracked gold bullion's recovery, adding 0.9% for the week at $27.00 per ounce, a sudden 7-year high when reached in early August.