END_OF_DOCUMENT_TOKEN_TO_BE_REPLACED

GOLD PRICES jumped towards 1-month highs in London trade on Thursday as global bullion-refining center Switzerland banned imports of gold from Russia and the Bank of England said the UK economy will be in recession by Christmas yet made the sharpest hike to UK interest rates since 1995.
Sterling fell hard on the announcement, losing 1 cent to the Dollar and dropping half-a-penny against the Euro to also hit 1-week lows.
With gold priced in Dollars retouching Tuesday's 4-week peak at $1788 per ounce, that saw the UK gold price in Pounds per ounce spike to £1480, up 2.0% for the week so far.
"It's our job to get inflation back down to 2%, so we have raised interest rates," says the Bank in the new Monetary Policy Report accompanying today's decision– backed by 8 of the 9 voting policymakers.
Running at 9.4% in June, CPI inflation will reach 13% per year this winter on the Bank's new forecasts, thanks to surging natural gas prices.
Today's hike of 0.5 percentage points – backed by 8 of London's 9 voting policymakers – marks the 6th consecutive rise in Bank Rate, taking it to 1.75%. 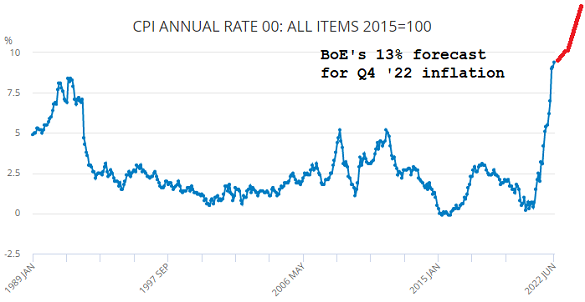 Gold priced in Euros rose more steeply still as German, French and Italian government bond prices joined US and UK debt in rising on Thursday – edging down borrowing costs.
That saw gold challenge mid-June's level at €1757 before also easing back as the Dollar price of bullion retreated $10 from today's peak to $1778.
Neighboring Switzerland – heart of the global gold bullion-bar refining industry – today followed the European Union in imposing a ban "on buying, importing or transporting gold and gold products from Russia" over Moscow's continued war on Ukraine, but it will also continue to accept oil and natural gas.
"The global impact on the gold market will be limited," says a note from brokerage StoneX, "given Switzerland 's [low] average annual direct imports of gold from Russia."
Venezuela's ruling president Nicolás Maduro yesterday denounced last week's UK High Court ruling that gold bullion held for the Latin American nation in the Bank of England's vaults should not be released to his regime's control.
"It is shameless and outrageous... an act of piracy...an operation of kidnapping and looting," Maduro said.
New US data meantime said the world's largest economy ran a smaller total trade deficit in June than May's all-time record, down to $80 billion thanks to growth in services exports.
New and continuing claims for jobless benefits in contrast continued to rise on the latest weekly data, extending the rebound from this spring's 5-decade lows.
The Bank of England now projects that soaring inflation means UK GDP will drop by 2.1% in real terms over the year to September 2023, markedly worse than the 0.8% drop it predicted this May, with inflation hitting 9.5% over that period, up from May's 5.9% forecast but slower than the 9.9% annual inflation now projected for September this year.
While the coming recession is forecast to end in 2024, unemployment will continue to rise into 2025, reaching what will be an 11-year high of 6.3% from today's 5-decade lows of 3.8%.