END_OF_DOCUMENT_TOKEN_TO_BE_REPLACED

GOLD BULLION jumped even as the US Dollar rose Wednesday, reaching new multi-month highs against the Euro, Sterling and Swiss Franc as Western stock markets sank again with crude oil prices.
US oil contracts reversed the week's earlier gain, whipping more than 3% for the 21st session out of just 36 so far in 2016.
Gold priced in Dollars touched $1251 per ounce in the wholesale bullion market, just $10 below this month's spike to 1-year highs.
Gold bullion meantime set new 10-month highs in the Euro above €1135, and shot within £2.50 of £900 per ounce against the British Pound as the UK currency slumped to new 7-year lows amid the Brexit debate.
That level was first seen in November 2010, some 10 months before the current all-time high of £1195, and last seen in September 2013. 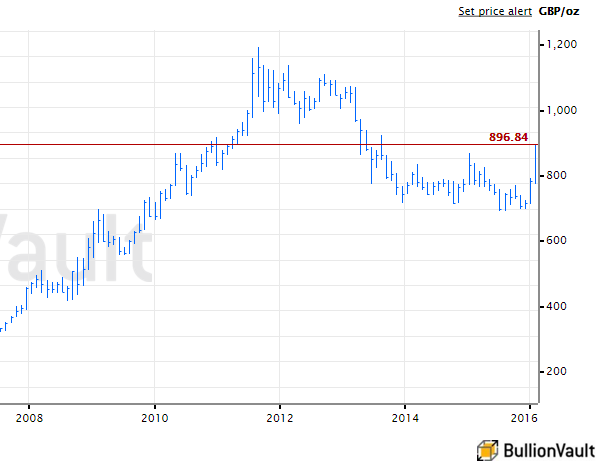 "Would we like higher gold price? Yes," says USAA Precious Metals & Minerals Fund assistant vice-president Dan Denbow.
"[But ] will the rest of your portfolio like it? Probably not."
"You've got the physical story," says investment, retail and bullion bank HSBC's head of FX strategy Daragh Maher, referring to what his colleague James Steel believes to be growing Asian demand, "and now you've got the risk-off story" in financial assets.
"Gold doesn't yield. Who cares? Nor does Germany."
German 10-year Bund yields offered new buyers just 0.17% per annum Wednesday lunchtime in Frankfurt as prices rose again.
Swiss 10-year yields meantime sank to new all-time lows of minus 0.4% per annum.
"[There's] a resurgence of bullish sentiment," say another bullion bank's analysts, but with prices jumping so sharply from late 2015's new 6-year lows so far in 2016, "buyers and sellers [are] fighting fiercely for control."
Over in India – world No.1 gold consumer market – "Discounts in the physical market have been larger than the duty cut expectations," writes fund manager Chirag Mehta of Quantum AMC in the Economic Times, referring to anticipation that next Monday's government Budget will reduce import tariffs of gold bullion from the current 10%, but also the $50 per ounce discounts to world prices being offered by retail dealers thanks to a stockpile glut and weak demand.
Looking to tap trading in the currency of China, the world's No.1 gold miner and importer, Hong Kong Exchanges & Clearing – which owns the London Metals Exchange, where Europe's last major "open outcry" market was recently moved to new facilities – said Tuesday it plans to launch Yuan futures against a range of other currencies, plus a Yuan-denominated gold contract, later in 2016.
"The cluster of all these currency instruments hopefully will create an eco system for China to say there is an offshore market that you can trade," Bloomberg quotes HKEX chief executive Charles Li.
Prices on the mainland's Shanghai Gold Exchange today rose another 0.3% against the Yuan by the close of Chinese trade, but the key contract finished at a discount of 75 cents per ounce to London quotes.
That gap is typically a premium, averaging $2.50 per ounce over the last 18 months and directly incentivizing new imports of gold to the world's second-largest economy.
Trading volume in the much-trumpeted "international" Shangahi gold contract iAu9999 – launched in late 2014 – today equaled just 0.0005% of the main T+D contract, having collapsed after briefly eclipsing the SGE's key onshore product in Spring 2015.