END_OF_DOCUMENT_TOKEN_TO_BE_REPLACED

GOLD BULLION held in a $4 range either side of $1100 per ounce in London on Thursday, trading 1% below yesterday's one-week highs as China's stock market slumped once again, but European share steadied ahead of the Eurozone central bank's latest comment on QE and sub-zero interest rates.
Keeping its main refinancing rate at a record low of 0.05%, and holding the deposit rate for commercial banks at minus 0.30%, the ECB's president Draghi was due to give his post-decision press conference at lunchtime.
London bullion clearing bank Barclays – one of only 3 of the remaining 5 clearers to operate its own vault – meantime said it is considering a sale of its precious metals division, with a memo to staff also announcing a further 1,200 jobs cuts, primarily in Asia, on top of the 7,000 completed last year.
Currently with a global headcount of 135,000 according to internal HR documents, Barclays is a participating member through its London bullion division of regulated, daily benchmark the LBMA Gold Price, and is also a market maker – quoting prices to buy and to sell throughout the trading day – in wholesale spot, forwards and options.
Today's news follows the exit from wholesale precious metals clearing, benchmarking and market-making of Germany's Deutsche Bank in 2013, and the exit of Japanese trading house Mitsui from London and Hong Kong precious metals trading at the end of 2015.
Two weeks ago the Thomson Reuters news agency reported rumors – as yet unconfirmed – that Chinese-owned ICBC Standard Bank is buying Deutsche Bank's now dis-used bullion vault in north-west London.
Last year, references to "gold" or "precious metals" trading appeared a total of 13 times in Barclays' 348-page 2014 annual report – only once outside footnotes on the lawsuits, fines and regulatory changes faced by the bank.
Between Barclays and the other 4 remaining clearing members of London's wholesale bullion market, average daily volumes of gold transfers fell in late 2015 to a 10-year low by weight, and down more than 50% by value from the peak of 2011. 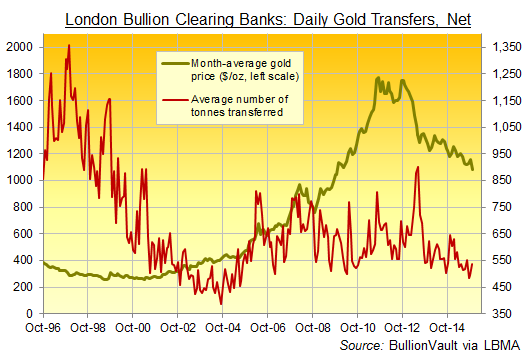 Almost 2,250 tonnes of gold have meantime exited London's wholesale bullion vaults since the start of 2013, according to UK import and export data, cutting the net inflows of the last decade to just 1,550 tonnes – scarcely half of 1 year's current global gold mining output.
Overnight in Asia on Thursday, "An early session dip below $1100 was short-lived," says a note from Swiss refining and finance group MKS's Australia team, "as Chinese interest kept the metal buoyant."
With global prices trading at their highest level in 11 weeks as Shanghai closed, the Chinese premium above Dollar quotes for London settlement rose above $2 per ounce, just below the average incentive offered to importers over the last 18 months.
At the retail level, "There's a bit of speculative demand," Reuters today quotes one Hong Kong dealer, "but not huge."
Indeed, China's economic slowdown, the newswire quotes another Hong Kong dealer, means demand will likely stay weak ahead of next month's Chinese New Year – typically the strongest period for household demand in the world's heaviest gold importing nation.