END_OF_DOCUMENT_TOKEN_TO_BE_REPLACED

GOLD BULLION BARS steadied above $1860 per ounce in London trade today, heading for a 1.3% loss from last Friday's finish as world stock markets showed a 1.0% gain following this week's further positive news on Covid vaccine trials.
US crude oil prices rose again, taking its recovery since Pfizer (NYSE: PFE) first announced successful results at the start of last week to 13.0%.
Energy prices have risen further "east of the Suez Canal" says the Wall Street Journal, reporting that " oil consumption in Asia has rebounded...fueled by China and more recently India" while new lockdowns in Europe and the US are weakening economic activity across the West.
Giant gold-backed ETF the SPDR Gold Trust (NYSEArca: GLD) saw a third daily outflow of investor cash yesterday, taking its net liquidation since Pfizer's announcement to 2.8% – the steepest 2-week decline since March's Covid Crash in all financial markets – and shrinking 4.8% since swelling to the largest in 7.5 years this time in September.
That's the GLD's sharpest 2-month outflow since spring 2019.
"It appears some market participants assume governments and central banks will return to more prudent fiscal and monetary policy next year, which is why they are selling gold," says German financial group Commerzbank's precious metals team.
"In our opinion, this expectation is likely to prove wrong."
But gold "trades on the interplay between inflation and interest rates," today's Financial Times quotes analyst Marcus Garvey at Australian bank Macquarie's commodities team, now forecasting that gold bullion bars will drop to $1550 per ounce next year.
"We're not saying you don't get a rise in inflation expectations [in 2021], but we think you get a larger rise in nominal yields" as bond prices fall, pushing up longer-term interest rates.
"The 'cyclical bull market' for gold has already come to an end." 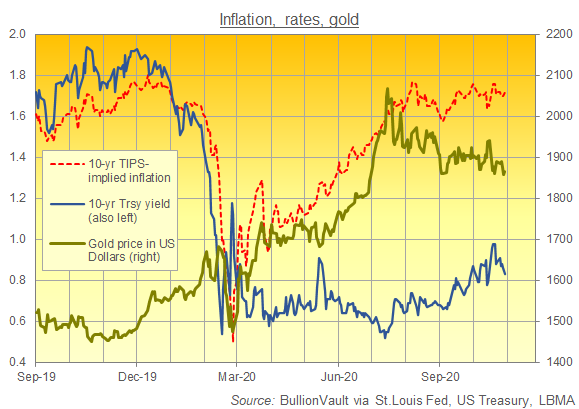 Since gold prices peaked at $2075 per ounce in spot trade on 6 August 2020, 10-year inflation expectations implied by US Treasury TIPS prices have risen by 9 basis points.
10-year Treasury bond yields have risen by 28, taking the real rate of interest higher by nearly one-fifth of a per cent.
"Positive Covid-19 vaccine developments should slow but not end the secular gold bull cycle without a hawkish pivot in US monetary policy," reckon analysts at US finance giant Citi, predicting fresh record highs for gold bar prices in 2021.
Federal Reserve lending programs "have clearly achieved their objective" already, wrote US Treasury Secretary Steve Mnuchin to the US central bank yesterday, ordering the Fed to withdraw $455bn of unused funding from the $2 trillion CARES Act stimulus, parts of which expire on 31 December, in what pundits called a "political" move amid the Trump White House's continued refusal to accept its defeat by Democrat Joe Biden in this month's presidential election.
"Markets responded positively, spreads tightened, and banks continued lending," says Mnuchin, backed by some Republican senators.
Turning bullish on inflation this summer after 25 years of forecasting deflation in consumer prices, "The mechanism through which money is created has changed" said money manager and finance historian Russell Napier earlier this week, calling the credit guarantees offered by government to commercial banks making new loans "a revolution".
Back in gold bullion bars, "ETF holdings are still eroding," says Rhona O'Connell at brokerage StoneX, "with a net dollar outflow of $3.2bn [from the sector as a whole] over the past 6 days.
"There is little doubt that when we return to safer pastures, gold's attractions will be reduced...[but] what we are seeing at the moment is a market in which some participants can't decide whether now is the time to get out, or whether there is more upside ahead."