END_OF_DOCUMENT_TOKEN_TO_BE_REPLACED

GOLD PRICES held onto yesterday's steep gains in Asian and London trade Wednesday as government bond prices extended their rally, edging longer-term interest rates lower again from their recent multi-year highs despite the suddenly strong annual inflation data caused by the Covid Crash in commodity prices 12 months ago.
Now showing a small rise for the week so far, gold prices today traded at $1745 per ounce.
Tuesday's drop in US borrowing costs came after an auction of new 30-year US Treasury debt met very strong demand despite strong US inflation data.
Yesterday's auction of $24 billion in debt maturing in 2051 saw the highest yield demanded by any bidder come at 2.32%, with the average bid wanting a return of only 2.27% per annum.
Washington's 30-year borrowing costs in March hit their highest since July 2019 at 2.45% per annum.
The 30-year yield today sank to a 1-month low of 2.29%, but yields on inflation-protected debt fell faster still as market-based inflation forecasts held firm.
That took the 30-year TIPS yield down to 0.09%, markedly above the negative readings first seen during last year's Covid Crisis but down from the 13-month high of 0.21% hit in mid-March. 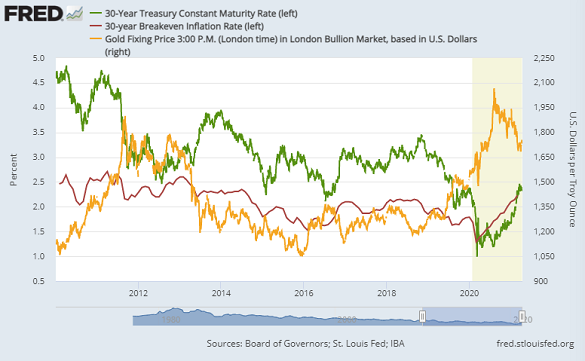 "While the US economy is showing signs of a pretty robust recovery," says precious-metals specialist Rhona O'Connell at brokerage StoneX today in analysis of the gold price, "unemployment is still relatively high and that detracts from the likelihood of an imminent sustainable rise in US inflation."
Gold yesterday made its 7th largest intraday gain of the last 12 months, adding almost $20 per ounce between the London AM and PM auctions.
"Investors had suggested demand for the 30-year bond could be strong given increased foreign demand," says MarketWatch.
"Longer-maturity bonds are popular with Japanese insurance companies and pension funds who are attracted by higher US yields compared to domestic investments."
"Japanese investors were on track to be net sellers of Treasuries for the sixth year in seven in their fiscal year to March," reports Bloomberg today. "Some [now] predict a return to purchases in 2021."
Eurozone government bond prices also rose further on Wednesday, pulling 10-year German Bund yields back down to minus 0.20% per annum and capping Italy's 10-year borrowing costs 14 basis points below February's 11-month high of 0.82%.
"Ttechnical factors might also be at play here," reckons Dutch bank ING's fixed income team, "as elevated government bond redemptions [in the Eurozone central bank's existing QE holdings] in April should bring higher ECB reinvestments, on top of the faster net purchases announced in March."
Meantime in geopolitics, and with the Biden White House pushing back the US military's exit from Afghanistan by 4 months to the 11th of September – 20th anniversary of Al Qaeda's 9/11 attacks – China today continued what it called "combat drills" near the independent nation-island of Taiwan which Beijing claims as a breakaway province, and to where Biden has sent senior diplomats as a "personal signal" of support.