END_OF_DOCUMENT_TOKEN_TO_BE_REPLACED

GOLD BULLION held in a tight $4 range either side of $1093 per ounce in London on Monday, trading sideways as industrial metals sank to new 6-year lows following the weakest Chinese manufacturing data in two years.
Fresh falls in new factory orders led to the fastest production cut since November 2011, said the July purchasing managers index for the Caixin news agency from consultancy Markit.
Markit's manufacturing PMI survey for the Eurozone showed a surprise rise, near the strongest growth of the last year.
US manufacturing activity missed forecasts, in contrast, slipping to a 3-month low on the Institute for Supply Management's PMI.
"Gold trades sideways," says one bullion market-maker's trading desk, pointing to "support" at $1078 per ounce, while "Silver is beginning to show signs of a recovery above $14.50."
Silver prices today tracked gold bullion, reclaiming half of a tight 10-cent drop from Friday's close to trade around $14.72 per ounce.
For base metals, "The really poor Chinese manufacturing data would be the primary concern," Reuters quotes one analyst.
"[Nor has there] been any stabilisation of Chinese stocks, despite all the efforts by the government."
The Shanghai stockmarket today lost another 1.1%, extending its drop from June's 7-year high to 30%.
"Physical [gold bullion] demand continues to cushion further price declines," says Japanese conglomerate Mitsubishi's precious metals analyst Jonathan Butler in his weekly note, pointing to the US Mint reporting a fourfold surge in sales of gold Eagle coins in July, plus a doubling of trading volume on China's Shanghai Gold Exchange.
"We attribute this to a combination of attractive gold prices," says Butler, "[but also] liquidations to meet margin calls on equity market losses."
At the retail level in China, "Both customer flow and sales of our gold products saw a notable increase recently," the Wall Street Journal quotes a spokesperson for Chow Tai Fook, China's largest jewelry retail chain.
The quantity of bullion needed to back the giant SPDR Gold Trust (NYSEArca:GLD) shrank last month at the heaviest pace since December 2013 marked the end of that year's 30% price crash.
With Western investors liquidating 39 tonnes-worth of shares in July, that took the GLD's holdings to a new 7-year low of 672 tonnes.
Hedge funds trading Comex gold futures and options meantime held more bearish than bullish contracts as a group overall last week, extending their first such 'net bearish position' since current records began in 2006. 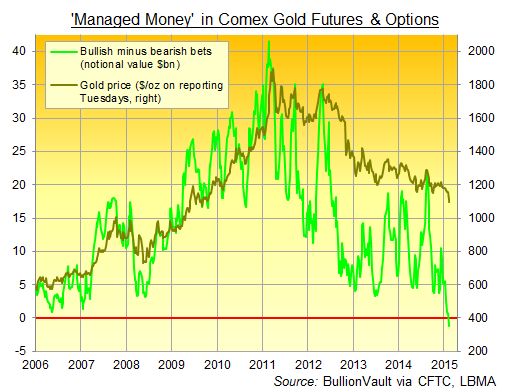 "Increasingly," Bloomberg quotes one small investment-fund manager, "you're seeing that other than ardent gold bugs, very few people are on the gold bandwagon.
"You've lost the generalist investment audience."