END_OF_DOCUMENT_TOKEN_TO_BE_REPLACED

DOLLAR STRENGTH capped gold-price gains for US investors on Tuesday but the precious metal reached new 2-month highs in Euros and Sterling as global stock markets extended yesterday's sharp rebound in New York 's stock market and the giant SLV silver ETF showed its heaviest investor inflows since the #silversqueeze ramp of late-January last year.
With the largest gold-backed ETF the SPDR GLD seeing record inflows Friday as global stock markets sank, shares in the iShares Silver Trust (NYSEArca: SLV) yesterday fell 2.2% in price as US equity markets rebounded and silver bullion dropped from 2-month highs above $24 per ounce.
A jump in demand for new shares however saw the world's largest silver-backed ETF end the day needing an extra 281 tonnes of bullion to back its value, beating late-September's spike of interest, when silver prices touched 14-month lows which the gray metal would revisit in December at $21.45 per ounce. 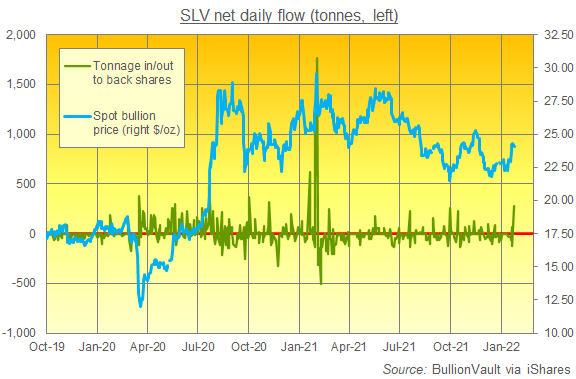 While reversing all of the SLV's outflows so far in 2022, Monday's inflow was a fraction of the 1,766 tonnes added on 2 February 2021, a record which capped a 3-day expansion of 19.3% in the SLV's shares in issue after the WallStreetBets short-squeeze of stocks in ailing US Main Street stores led by Gamestop (NYSE: GME) was followed by calls on Reddit to buy the SLV and "f**k the banks".
The number of SLV shares outstanding then erased that bump by the end of April, and has since fallen below 80% of the #silversqueeze peak, needing 16,568 tonnes of silver bullion this morning according to iShares' public records.
That equates to last year's total global industrial demand for silver, itself a record according to specialist analysts Metals Focus, reporting for the Washington-based Silver Institute.
"There [had] been much larger participation from non-Western players in silver," says a trading note from Swiss refining and finance group MKS Pamp, "helping to drive its outperformance" relative to gold so far in 2022.
Tracking the relative prices of the two formerly monetary metals, the Gold/Silver Ratio last week touched a 2-month low near 74, repricing 1 ounce of gold sharply lower from the New Year's 14-month peak above 81 ounces of its more industrially-useful cousin even as it rose in terms of all major currencies.
Last week's peak in Shanghai silver prices "through the psychological 5,000 CNH/kg level [was] injecting further momentum buying," MKS goes on, noting that premiums for silver landed in China versus London had risen to 13 cents per ounce.
With China's financial markets closed all next week for the Lunar New Year holidays, the gap between London and Shanghai gold prices widened to $7 per ounce on Tuesday, offering the strongest incentive for new imports to the precious metal's No.1 consumer nation so far in 2022, albeit $1.50 below the pre-Covid average.
Priced in the Dollar, London gold held above $1840 per ounce on Tuesday, rising to £1368 for UK investors and also hitting a fresh 2-month high for Euro investors above €1635 – less than 7% below the all-time high of August 2020.
Silver prices meantime slipped back below ¥5,000 per kilo on the Shanghai Gold Exchange and fell back towards yesterday's 3-session low of $23.57 per ounce in London trade.
"There is no way to explain what happened in terms of any fundamentals or news," says Bloomberg columnist John Authers of Monday's sharp reversal in US stock markets.
With the Nasdaq Composite index down 4% on the day and almost 20% from November's record high, "Enough people, or their algorithms, judged at about noon that the recent trends had been taken far enough for now, and...whatever was down the most, that was what you wanted to buy."
So-called cryptocurrencies also rallied sharply on Monday, extending their rebound on Tuesday with Bitcoin and Ripple both bouncing over 10% from their new 6-month lows, while Ethereum rallied 13% and Dogecoin – launched as a "silly joke" in 2013 and touted across mainstream media last spring by celebrity crypto promoters at 60 cents and higher – rallied 2 cents from last week's 9-month low of 12 cents.
The tech-heavy Nasdaq has only fallen 4% intraday and finished in positive territory on 5 previous trading days, Authers reports.
On average, the index then went on to lose 2.9% over the following week, 5.6% over a month, 7.9% over three, before showing a 10.8% gain by the 1st anniversary.