END_OF_DOCUMENT_TOKEN_TO_BE_REPLACED

SILVER PRICES jumped once again on Wednesday, leading gold for the 9th trading day of 14 so far in April as Western stock markets struggled to extend the last week's run of gains.
The US Dollar stemmed its fall at new 1-week lows to the Euro of $1.13880, helping gold for Eurozone investors climb back above €1100 as silver prices approached new 10-month highs above €15 per ounce.
European interest rates fell as government bond prices rose, while US crude oil sank 2%, retreating back near $40 per barrel – a new 12-year low when first reached last November.
Peaking in Dollar terms at new 11-month highs above $17.20 per ounce at the end of Shanghai trade, silver bullion cleared at London's wholesale benchmarking auction at $16.97 – the highest LBMA Silver Price since 22 May 2015 – before rising back above the $17 mark in spot trade. 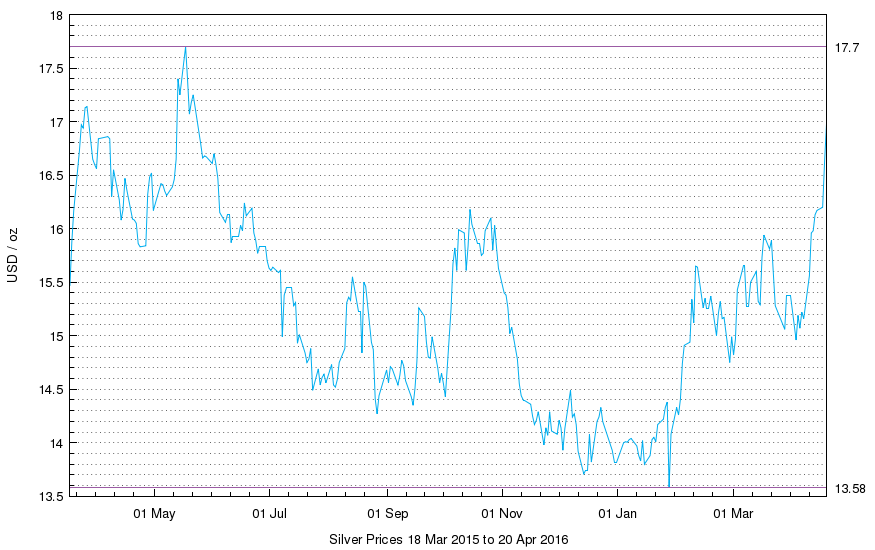 "From a longer term perspective we view the market as basing," says technical analyst Axel Rudolph at German financial services group Commerzbank, setting a "minimum target" for the silver price of $18.88 per ounce.
Turning "bullish" on Commerzbank's charts, "The silver market has seen a strong rebound from the 200 day-[moving average] at $14.92 as expected [in early April]."
Accounting for half of the world's annual silver demand, "Silver industrial offtake [will] rise further" in 2016, says the latest Precious Metals Weekly from specialist analysts Metals Focus, "but will fall short of the 2011 high."
Looking specifically at photo-voltaics – which could use 7 times as much silver in 2016 as it did a decade ago at almost one ounce in every 6 of industrial demand – solar panels now use markedly less silver to produce the same amount of electricity, Metals Focus says.
But "one key positive for the PV industry has been...the  sizeable commitments made notably by China, Japan and India. In 2010 Europe accounted for 80% of global installations. Last year, Europe’s contribution fell to around 16%...[and] greater participation by an increasing number of markets will spread (and so lessen) the risk should [government subsidies] be scaled back in a given location."
Looking at the speculative market, however, "We still remain cautious on silver," Reuters quotes Swiss refiner and finance group MKS's Alex Thorndike, "given that net [bullish] positioning [in Comex futures sits] at 79% of the all-time high.
"This screams of a rally that could run out of puff all too quickly, and experience a short and sharp capitulation."
Gold prices meantime rose near yesterday's 1-week highs above $1250 per ounce – a level which saw the largest gold-backed exchange-traded trust fund (ETF) shrink as shareholders sold out, trimming holdings for the SPDR Gold Trust (NYSEArca:GLD) back to 805 tonnes. 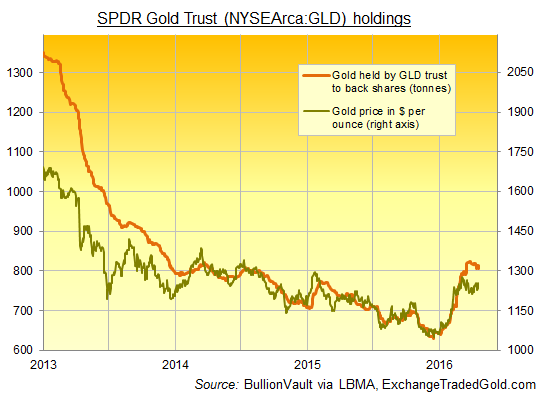 Silver ETF holdings have also retreated since the spring's earlier peak, shrinking 0.5% at the iShares Silver Trust (NYSEArca:SLV) over the week to Tuesday's close, in line with net liquidation of shares by investors.
All told however, the 6 largest silver ETFs have now swelled by almost 930 tonnes so far in 2016, equal to 30% of last year's total global mine output, according to data from Reuters.