END_OF_DOCUMENT_TOKEN_TO_BE_REPLACED

SILVER PRICES again outperformed gold on Wednesday, holding flat for the week so far while the less industrially-useful precious metal dipped once more but held above yesterday's new 2-week low against a rising US Dollar.
Gold held below $1840 while silver prices traded back to $27 per ounce as stock markets rose most everywhere except London after new PMI business activity surveys said the services sector continued to shrink in January but less quickly than analysts forecast.
Milan's FTSE MIB index meantime leapt by 2.5%, outrunning the wider 0.9% rise in continental European bourses, on news that former European Central Bank chief Mario Draghi is "confident" he can form a viable coalition government in the European Union's 3rd largest economy.
Excluding volatile food and fuel, core consumer-price inflation across the 19-nation Eurozone popped to 1.4% per year last month, Eurostat said, above analyst forecasts of 0.9% but driven by the end of a sales-tax cut in No.1 economy Germany.
US employers meantime hired over 3 times as many people as analysts expected according to the private-sector ADP Payrolls report.
Tuesday's falling silver price – down 12.3% at one point from Monday morning's new 8-year highs just shy of $30 – coincided with a fresh record daily inflow to the iShares Silver Trust ETF (NYSEArca: SLV).
By far the metal's largest such exchange-traded product, the SLV grew by 9.8% yesterday, needing an extra 1,766 tonnes of bullion backing – equal to more than 73 times last year's average daily inflow.
With silver bullion prices today trading 6.7% higher from last Wednesday – eve of the WallStreetBets post urging other readers of the Reddit social media site to "Buy silver and f**k the banks" – the giant SLV has now seen its shares in issue swell by 18.4%, taking it to a new all-time record size.
That surge has meant the quantity of bullion needed to back those shares – held at commercial vaults in London and also J.P.Morgan's vault in New York – has grown by 3,280 tonnes, equal to 13.5% of the best current estimate for last year's total global mine output, and taking the SLV's total backing up to 21,067 tonnes. 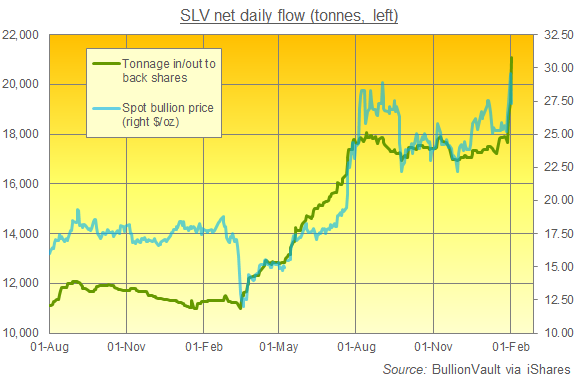 Total London stockpiles of large silver bullion bars – including metal held for the SLV – ended December at 33,609 tonnes according to vault data from trade association the LBMA.
Market-ready bars in New York vaults totalled 12,360 tonnes last night, again including metal held for the SLV, according to warehouse reports to the CME derivatives exchange.
"Given an already bullish silver outlook, Reddit-type investor campaigns could...bring forward the forthcoming rally" in silver prices, says the latest weekly analysis from specialist consultancy Metals Focus.
But while "concentrated investor buying can certainly fuel strong rallies as the past few days have illustrated, these however are likely to be short-lived in the absence of more structural bullish factors" – factors which for 2021 Metals Focus last week detailed in a report just before the Reddit post appeared.
Commodities meantime rose today with global stock markets, taking crude oil up to the highest since the start of last winter's Covid Crash above $58 per barrel of European benchmark Brent.
Base metals also rose Wednesday, led by copper – which last month touched 8-year highs as silver did Monday – while platinum prices back above $1100 per ounce, a 52-month high when reached this New Year.
Government bond prices retreated however, edging borrowing costs 3 points higher on 10-year US Treasury debt near 2-week highs at 1.12%.
Italy's government bond prices however spiked on the comments from "Super Mario", driving down yields to barely 1.0% above Germany's comparable borrowing costs, the narrowest BTP-Bund spread in 5 years.
With the Eurozone 600 ex-UK index of equity prices edging up near last week's 11-month highs, London's FTSE All-Share in contrast held dead-flat, trading 4.4% below last week's peak, as the Pound rose to its highest against the Euro since May 2020 on the FX markets amid continued UK-EU wrangling over Covid vaccine supplies – a row that now involves the Ireland-Ulster border, where customs checks have now been suspended following threats against officials.
Sterling's gain capped the UK gold price in Pounds per ounce at last weekend's level of £1348, while gold priced in Euros traded 0.4% higher at almost €1530.