END_OF_DOCUMENT_TOKEN_TO_BE_REPLACED

SILVER PRICES sank almost over 80 cents at Thursday lunchtime's London benchmarking, hitting the lowest level in 7 years – while gold prices and Comex silver futures contracts held almost unchanged near multi-month highs – thanks to what some traders called the unintended consequences of regulatory compliance by banks and brokerages.
Modelled on the century-old 'London Fix' which it replaced in 2014 – and which offered a moment of unlimited liquidity to would-be buyers and sellers – the LBMA Silver Price became a formally regulated benchmark under UK law last April.
With spot bullion for London delivery quoted around $14.41 – only 1.1% below yesterday's new 7-week highs – the 12 noon benchmarking auction saw what participants called "heavy selling", with lower suggested prices failing to elicit stronger demand to balance it.
The silver price suggested by exchange group the CME's electronic algorithm was then cut ever lower before suddenly finding enough demand to balance the selling at the lowest price since 30 July 2009.
Dealers blamed Thursday's action on rules – decided by the compliance departments of banks and brokerages, and aimed at meeting the new regulatory regime – which block traders participating in the benchmark auction from "arbitrage" in other silver markets at the same time.
Comex futures were selling 80 cents higher at the final round of today's silver benchmarking auction.
Spot bullion quotes got as low only as $14.15, rising back to $14.40 within 90 minutes. 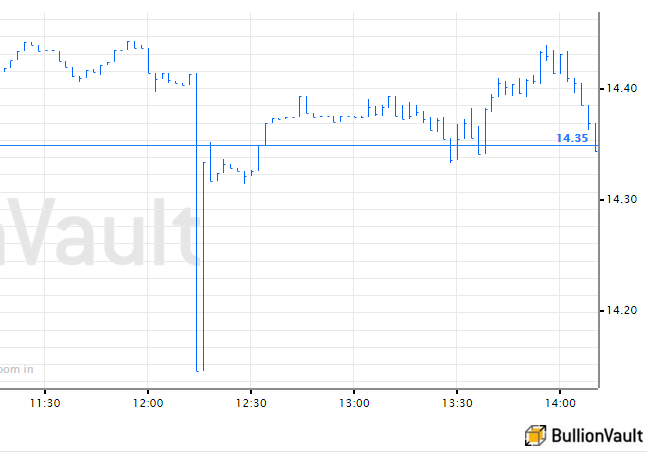 "[Any]one selling silver down at $13.58 was given an extremely raw deal," says one trading note, "with CME [silver] futures still bid above $14.40.
"As soon as [the benchmark] was done, [futures market] was hit with arbitrage selling and traded down to 14.07 with 5,000 lots trading. Then bounced back to trade $14.30+."
Gold prices meantime edged barely $3 per ounce lower from $1122, a near 3-month high when first reached at the start of this week.
"Jewellery and physical demand is weak," says gold analysis from London clearer, market maker and bullion bank Barclays (LON:BARC) in what – after it last week said it may following Deutsche Bank and Mitsui in quitting the bullion market – it said will be its final note on precious metals.
"Only central bank buying looks to be growing," with China – the world's fastest hoarder of the last 50 years – likely to buy another 200 tonnes in 2016 on Barclays' estimate.
For gold prices, "China's biggest gift over the next year may be the worst case scenario of a hard landing," the note concludes, "which should trigger safe-haven gold demand."
Mainland China's stockmarket fell hard again Thursday, with Japan and Europe also dropping once more.
Commodities held steady after turning higher at the start of this week, and major government bond prices also rose – pushing 10-year US Treasury yields back below 2.0% – after the US Federal Reserve held its key interest rates unchanged as expected on Wednesday.