END_OF_DOCUMENT_TOKEN_TO_BE_REPLACED

SILVER PRICES rallied again through $26 per ounce in London trade Thursday, adding almost 60 cents from Monday's brief 9-week low as gold rose to show a gain for the week so far in all major currencies except the Canadian and Aussie Dollars.
Reaching $1788 per ounce, gold priced in Dollars peaked more than $5 below yesterday's high.
The SPDR Gold Trust (NYSEArca: GLD), the world's largest gold-backed ETF investment fund, yesterday shrank for the 2nd day in three, now erasing half of last Friday's apparent 'bargain hunting' inflow, when the GLD saw the strongest 1-day expansion since late January.
The giant SLV silver ETF meantime shrank by another 0.3% on Wednesday, taking its liquidation over the last 5 trading days to 452 tonnes, the heaviest 1-week outflow since March's sell-off following the record #silversqueeze inflows.
Yesterday's net selling by SLV shareholders shrank the giant silver-backed ETF back to end-2020 levels, erasing what remained of this year's previous 21% increase.
Silver bullion prices have meantime lost half-a-dollar since New Year's Eve, trading back at $26.10 per ounce once again Thursday for a 50 cent gain from Monday's brief 9-week low. 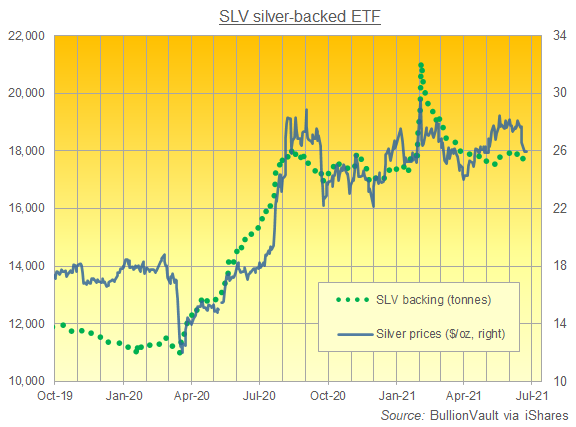 "Gold rallied strongly in early NY trading [Wednesday] as the Dollar erased gains after US data," says a trading note from Swiss refiners and finance group MKS Pamp, pointing to yesterday's unexpected drop in sales of new US homes for May.
"Cash [gold] prices broke up to $1795, pulling silver to $26.30, but both rallies were quickly capitalized on and all gains were erased (and more).
"The quick reversal is the first sign we’re getting that price rallies may be short-lived as underweight momentum shorts re-engage."
Silver priced in the Euro today held little changed for the week so far at €21.85 per ounce, while gold briefly rose to €1498 after failing for the 4th session running on Wednesday to maintain a bounce above €1500 following last week's steep drop following the US Federal Reserve's hint that it may raise Dollar interest rates sooner than previously forecast.
UK gold prices in Pounds per ounce however jumped £15 this morning to turn positive for the week so far at £1282 as Sterling fell on the currency market following a near-unanimous "no change" decision from the Bank of England on its record-low interest rate and record-high quantitative easing money-creation policies.
Dissent came only from career policy-maker Andrew Haldane – voting for the last time before leaving Threadneedle Street to lead the RSA think-tank – who called for no change to rates or the monthly pace of QE but wanted a 5% lower limit for total government debt purchases at £825 billion.
That would still see the Bank of England create enough new cash to buy and hold almost two-fifths of the UK government's current debt outstanding, itself a record.
"The beast of inflation is stalking the land again," said the headline over an opinion piece from Haldane published last week.
"A rapid resurgence in both spending and inflation is now a plausible central scenario...[It] needs to be understood, monitored and potentially acted on by central banks if the inflation genie is not to escape after a half-century of captivity."
The Bank's "no change" decision saw longer-term UK interest rates sink almost 5 basis points on Thursday, nearly touching 0.74% per annum on 10-year Gilts, the lowest since the US Fed's policy statement spooked global bond markets on Wednesday last week.
"Silver production, supply and demand all dipped because of the Covid crisis," says Michael DiRienzo, executive director of the non-profit Silver Institute association of producers, traders and consumers.
Looking at silver's different uses, "The photovoltaic market bucked the trend, with demand growing by 2%," says DiRienzo, "while investment in silver also grew in 2020 and did so in double figures. For 2021, it should remain high."